1988 shares
This flavorful, meaty Crockpot Venison Stew recipe is cooked on low in your slow cooker all day bringing you home to the wonderful aroma of venison stew hitting your nose and making your mouth water!
Jump to Recipe

Crockpot Venison Stew is slow-cooked to perfection in a dark rich broth full of deer meat, potatoes, and tenderizing brown ale! Come home to a hot and hearty meal straight from your slow cooker! Pair your venison stew with a few slices of Homemade Soft White Bread. Just right for sopping up all of the tasty rich broth at the bottom of your bowl!

There is nothing that will draw your family to the kitchen like the wonderful aromas of venison stew hitting their nose as soon as they walk in the house! This Crockpot Venison Stew will do exactly that. So flavorful and delicious, there won't be a drop left in their bowls.

I always start thinking about Crockpot Venison Stew when the fall gets here. Pretty soon, another deer hunting season will be right around the corner. We will be back in the woods, looking to bring home some more wild game for our freezer.

When we return from the night watch in the woods, we are usually chilly and hungry. Coming home to a house filled with the aroma of a hot venison dinner ready to go on the table is so comforting. This Crockpot Venison Stew warms us up quite well after spending time in the woods!

What You Need to Know About Deer Meat

What is venison stew meat?

Stew meat is basically the least tender cut of the deer. Grumpy says it is the bits and pieces of tougher meat that also can be made into ground venison. It is the tougher meat from the animal which is why slow cooking is the best way to prepare it.

Can I use another cut of deer meat for stew?

Stew meat is basically the least tender cut of the deer. Grumpy says it is the bits and pieces of tougher meat that also can be made into ground venison. It is the tougher meat from the animal which is why making venison stew in the crockpot is the best way to prepare it.

Does all venison have a wild gamey taste?

Wild game has a rich and earthy flavor. However, gaminess is caused by several factors. Undesirable flavor can be the result of taking an older buck, one that was in the rut (therefore his testosterone is high), or poor processing can all be factors of a gamey flavor.

How long can I store venison in the freezer?

It depends on how the meat is packaged. I recommend vacuum sealing. Good wrapping will assist in longer storage. We have had venison in the freezer for as long as 2 years and have never had freezer burnt meat.

What you need to make this recipe

Below are just some of the basics you need to make this recipe. You will need several seasonings from the pantry which are listed in the recipe card itself.

Potatoes: I love to use gold potatoes. I feel like they have the creamiest texture and buttery flavor. They go excellent in this stew.

Cremini Mushrooms are my favorite. If you don't like mushrooms, just leave them out. You can also use white button mushrooms or baby portabellas.

Tomato Paste: this is an important ingredient. It will help thicken up the stew as well as add flavor.

Red Wine or Beer: A dark or light beer will work, whichever you enjoy the most. I prefer a dry red wine.

Beef Broth: Essential in this recipe. It adds flavor.

Crockpot: I use this one. I love that it has a warm setting on it so if it finishes before we get home, it keeps it warm still.

Prepare the stew meat by tossing it with flour, salt, and pepper in a mixing bowl.

Heat a large non-stick skillet until it is hot. Add 1 tablespoon of oil and sear meat until browned on all sides. This should only take 2-3 minutes.

In your crockpot, layer your vegetables and seasoning in your slow cooker ceramic pot. Start with the potatoes and end with the seasonings (the first 13 ingredients listed in the recipe).

Place the browned stew meat on top of layered vegetables and pour broth over top. Place the lid on your crockpot and set you're it to cook on low temperature for about 7-½ hours. Cooking on high heat is not recommended for this recipe.

When your venison stew is done, remove the bay leaf, serve and enjoy!

Whenever we eat a stew, we like to have some sort of starch to soak up the gravy at the bottom of our bowl. I usually will make a recipe for Homemade Soft White Bread or Homemade Sweet Dinner Rolls to serve with this stew!

If you love Venison Recipes, be sure to check out my new website. Some of our favorite recipes there is Venison Stir-Fry, Venison Sloppy Joes, and BBQ Cheddar Meatloaves!

The convenience of the slow cooker makes dinner time smooth going. Coming home to a hot meal with no mess is pretty darn satisfying! Some of our favorite recipes are Slow Cooker BBQ Beef Brisket, Slow Cooker Beef and Veggie Sliders, and Slow Cooker Baby Back Ribs!

*If you made this recipe, please give it a star rating* 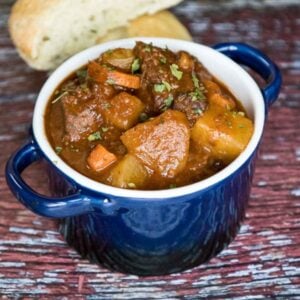