This Pho Soup Recipe is made with Shirataki Noodles, Chili Spiced Veal Meatballs, and a lightly gingered chicken broth with Shiitake mushrooms. It is garnished with fresh basil, jalapeno slices, and limes wedges. Then, it is served over top of Shirataki Noodles!

Pho Soup with Veal Meatballs is my take on an Asian recipe for Vietnamese Pho. It is a fusion recipe that incorporated ground veal seasoned with chili and ginger, made into tiny meatballs and fried in a combination of olive and sesame oil. Full of delicious flavors, this is a veal recipe you want to be sure to try!

The New York Beef Council is dedicated to educating people on where our food sources come from and how they are raised. As a result, I have been invited to their educational tours so I can share what I have learned with you!

We visited a veal farm in Western NY on our most recent tour. This part of the tour was very similar to one I attended in the past. You can read about how veal is raised by checking out my post on Bacon Wrapped Stuffed Jalapenos.

The second day of the tour we went to the New York Kitchen. There we were paired up with Culinary Instructors and assigned a theme to #revealyourinnerchef by creating veal recipes.

The theme I received was Asian and I immediately thought of food I liked to eat when I eat out at Asian restaurants. Pho happens to be one of my favorite take-out orders. So, I started thinking about how I could work veal into it and meatballs automatically came to mind. As a result, Meatball Pho Soup came to life!

What is a Pho Soup Recipe made of?

Pho is a Vietnamese soup made of broth, meat, noodles, herbs, and spices. I consider this Meatball Pho a “fusion” of sorts, due to the fact I used ground veal, something that is not traditionally used in Pho!

Pho broth is usually a chicken broth that is lightly seasoned with a little ginger.

What meat is in Pho Soup?

Chicken, Beef, Shrimp, are all common meats found in Pho Soup. I took the idea of meatballs in soup from Italian Wedding Soup and made this Meatball Pho by creating veal meatballs that were flavored with onion, garlic, ginger, and chili sauce.

What toppings can you put on Pho Soup?

The traditional toppings are bean sprouts, fresh basil, and jalapeno. These are the toppings that come with Pho Shop when I buy takeout. I couldn’t get bean sprouts in the store but found fresh Shiitake Mushrooms. I fried them in the leftover oil from cooking the meatballs, seasoned them, and added them to the broth.

What kind of noodle is used in Pho Soup?

Traditionally, it is a rice noodle. We don’t eat rice or pasta so I went with tofu noodles, also known as Shirataki Noodles.

How I made this recipe

I started putting this recipe together with some very basic and simple Asian ingredients.

The veal meatballs are made with ground veal, chopped onion, minced garlic, salt, crushed pork rinds, and chili sauce. Then, frying them in a combination of olive oil and sesame oil adds more of the Asian flavor.

Veal has a pink color to it and the Sambal Oelek Chili Paste is deep red. As a result, the meatball mixture will have a darker red tint to it.

As the meatballs cook, the oil will start to turn reddish in color. This is due to the chili sauce in the meatballs. The chili sauce will begin to “weep” into the oil. This is ok, it just gives them even more flavor. Plus, you will have a great use for this chili flavored sesame oil in another step!

When the meatballs are ready to come out of the skillet, remove them with a slotted spoon. Then, place them on a paper towel lined plate to drain.

I used fresh Shiitake Mushrooms for this recipe. If you can't find them, feel free to use dried mushrooms that have been reconstituted. As an alternative, you can use baby portobello mushrooms if Shiitake are hard to find.

When I made this soup in the test kitchen, I did use dried. If you use dried mushrooms, just reconstitute them, drain, slice, and toss in the skillet to coat with the chili oil.

Making the broth and assembling the Meatball Pho Soup

I make a very simple chicken broth by using either a bouillon base concentrate or bouillon cubes. Follow the recipe on your packaging to make 8 cups of broth. Using ready-made broth is fine also.

To give an Asian flavor to the broth, I added freshly grated ginger. I also added the fried Shiitake Mushrooms to the broth, then brought it to a boil. Once the flavoring is in the broth, I let it simmer for about 10 minutes to infuse those flavors.

While the broth was simmering on the cooktop, I rinsed the Shirataki Noodles with hot water, then added some to the soup bowl, along with 3 meatballs. Traditionally, rice noodles are used. Since we don't consume rice and pasta, we use an alternate ingredient.

Once the bowl is assembled with the meatballs and noodles, you will pour the broth over top and garnish with fresh basil and jalapeno slices!

What to serve with Pho Soup

I love to serve soup as an appetizer, but we also are happy to eat a larger serving of it as our main meal! Appetizers are known to make an appearance in our home as a main course. If you are thinking about serving just appetizers, this veal recipe for Sloppy Joe Stuffed Biscuits should hit the spot!

If you have a sweet tooth that needs to be satisfied, then this recipe for Vietnamese Banana, Coconut & Tapioca Dessert (Chè Chuối) would be delicious! 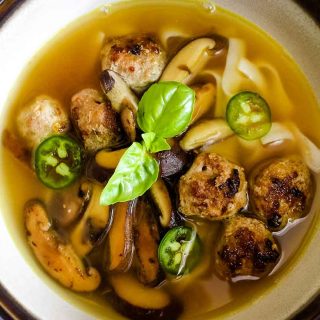 For the Veal Meatballs

To make the meatballs

To make the Pho Soup broth

To Assemble the Soup