Baking donuts to make our special treat better for you! While I love a good fried donut (of fry cake as I grew up calling them), I don't love the grease. Baking donuts is definitely the way to go to have your treat and eat it with far less guilt! 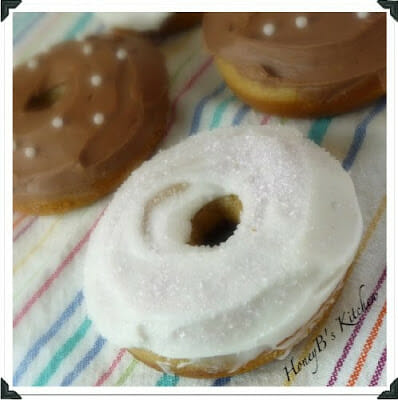 Sunday mornings are usually pancake or waffle mornings. Last weekend we had company and I made waffles for breakfast - but not without checking to see what I had left for maple syrup! That was a mistake....because Grumpy does not like his waffles without maple syrup. Fortunately our friends were good sports and were willing to eat jam on their waffles! When Grumpy and I went to the store I did the thing I don't like to do. I bought Aunt Jemima. I'm sorry to the Aunt Jemima lovers out there, but I was raised on pure maple syrup and to me, Aunt Jemima is just too thick and fake tasting. Maybe it has changed over the years, but this weekend I didn't want to find out. I know that I can't wait for my 2 gallons of pure maple syrup to be ready for my pick up this year though! I decided if we were going to go thru 1 gallon before my year was up, I better get myself 2 gallons this time! 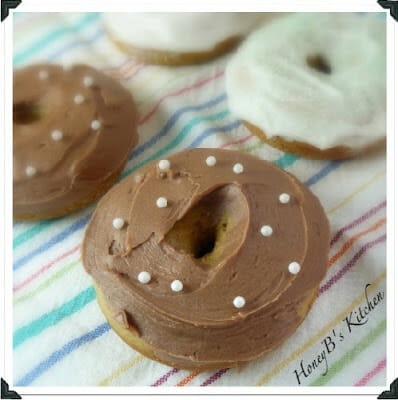 That all said, I had been eying the baked donuts on the cover of Family Circle for the last few weeks. I made the Vegan Yum Yum baked donuts about 6 weeks ago and while they were good, I have to say that I believe these were better. I know I am definitely making them again.

I stuck with the vanilla flavored donuts for my first try.  These donuts use brown sugar in the ingredients, so the interior is dark for a donut (for me).  I used light brown sugar (which ended up being all I had) instead and it was still dark.  No problem though - they still tasted delicious!  I will probably add some cinnamon or nutmeg to the batter the next time I make these.  I also only had Silk vanilla milk in the fridge.  I had some regular milk but this is what Grumpy uses so I didn't dare use that instead as there wasn't much left!  I just added some lemon juice to the Silk and let it sit for a few to let it curdle some and used that in place of the buttermilk.

This is a perfect treat to make when you want to have portion control - meaning you don't want to eat a dozen donuts over the course of the day 😉 and they are pretty darn good replacement for a fried cake like my momma makes!  Although, if my momma were to bring me a dozen of her fried cakes, you can bet I wouldn't be turning them down!  While Grumpy and I are trying to control our eating of sweets, I am allowing myself to bake one thing a week for now and I am also doing my best to make the baked treat healthier for you (welcome Cooking Light!) and make only half the recipe unless I have people around to share with.  We are also trying to sit at the dinner table to eat our meal instead of in the living room in front of the TV.  What terrible habits we slip into when the kids are gone! 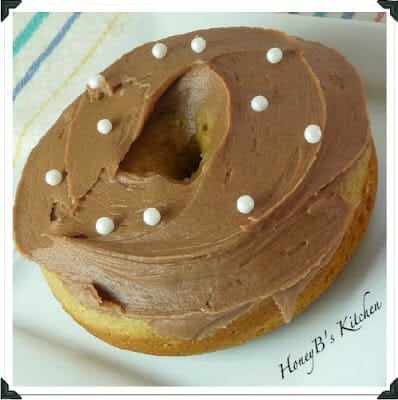 See those pretty little pearls on the donut above?  I've been dying for a chance to use them and these donuts gave me that chance!
A few years ago when I was visiting my brother in Indianapolis I bought the non-stick donut pans for baking.  I used them once when I was at his house and then never again until 6 weeks ago when I made the Vegan Yum Yum donuts and then again yesterday when I made these donuts pictured here.  This pan is probably going to be used more often now that I realize that the baked donuts can be pretty darn good.  I'm not saying these are perfect for me, I think I need to tweak some to make them the way I myself want them, but this recipe is nothing to scoff at.  The donuts rise so nice and its so cool to watch them dome on the top and look like a donut!  (lol, yeah, I know, I can be so childlike at times!).
Vanilla Cake Donuts
Author: adapted from Family Circle Magazine
Ingredients
Instructions
3.5.3208