I know what your thinking.  But SHE just told us all she is working out and eating healthier.  Well, your right.  I did and I am.  🙂  But who say's you can't have a little something naughty sometimes too.  As long as it is only a little naughty.  By little here, I mean teeny tiny piece.  With this pie, that is not hard to do.

My friend Patsy recently made a Peanut Butter Pie.  She was good though and made a lighter, better for you pie.  Me.  I had to go and make Paula Deen's artery clogging recipe.  I did use ⅓ less fat cream cheese and less heavy cream though, if that counts for anything? Um, but I did add hot fudge sauce.  LOL

It had been a while since I had made any dessert to have in the house for after dinner.  That is when Grumpy likes his sweets.  About an hour or so after his meal he is ready for dessert.  Many times, he has to go without because I just don't have it here.  We were having the in-laws up yesterday however so I decided to make this peanut butter pie.  Not because of Grumpy mind you.  But because I knew my MIL would really enjoy it (and she did!  lol).  My mom also got a piece to take home with her and she promptly told me today that she ate it as soon as she got home.  Dad, he had to take some coffeecake because he doesn't like peanut butter.  I know, can you believe that?

I had a little tiny sliver last night and a little bit of what I have photographed here this afternoon.  Then it went back in the freezer.  Its plenty sweet and plenty rich.  You don't need much to be satisfied! 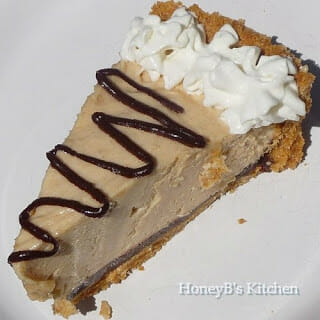 Prior to serving, top with whipped cream (I used pressurized cream) and drizzle with warmed hot fudge sauce.  Enjoy!