Keto Rhubarb Dream Bars are a layered dessert bar made of a shortbread crust, a layer of rhubarb custard, and dreamy cream topping!  This will become your favorite keto rhubarb recipe this spring!

These Rhubarb Dream Bars are a delicious dessert to serve to from the time rhubarb starts to pop out of the ground and is ready to harvest! This makes an impressive dessert to take to picnics, family reunions or potlucks!

Why I made a Keto version of this Rhubarb Recipe

I made a non keto version of rhubarb custard bars for years. So, when my rhubarb was ready to harvest, my mind naturally went to that recipe and how much I wanted to eat it. So, Keto Rhubarb Dream Bars were born!

I went about creating a shortbread made with almond and coconut flour, coconut oil, and Swerve sweetener. The rest was easy, as custard is naturally low carb as long as you are using a sugar-free sweetener like Swerve!

Can I substitute heavy whipped cream for cool whip in the Rhubarb Dream bar topping?

Yes, you can substitute heavy whipped cream. Just be sure your cream cheese is softened before folding them together.

Is the coconut oil ingredient in the Rhubarb Dream Bar crust liquid or solid?

If your coconut oil has solidified, then I recommend melting it prior to adding to your crust ingredients.

How thick is the shortbread layer in in your Rhubarb Dream Bars?

To get the correct crust ratio, you need to use a 9 x 13 baking dish. The crust in the photos may look like it is thicker, but due to the nature of the ingredients, the custard baked into the crust some, making the crust look thicker than it is.

Why did you use Xanthan Gum in your Rhubarb custard layer?

The original recipe calls for flour, which is used to thicken. I removed the flour and experimented with Xanthan Gum. You could also just add an extra egg or two to help the dream bar custard firm up more.

I am such a huge fan of rhubarb recipes that I have several that are made often every year when my rhubarb comes to harvest. Recipes like Strawberry Rhubarb Chia Pudding and Mom's Rhubarb Sauce recipe are two of my favorites. I also love this Low Carb Rhubarb Coffee Cake! 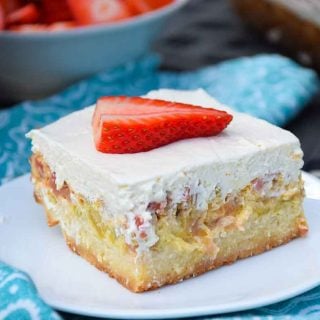