12 shares
This plant based steak recipe is a great alternative for those wanting to live a meat free diet. These steaks are very versatile and can be used to make some of your favorite mock meat dishes. 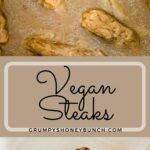 This vegan steak recipe is a homemade meat substitute that with great texture that is simmered in a flavorful broth. It is also known as Seitan and can be used to make many delicious recipes like fajitas, sandwiches, and more.

This vegan seitan steak recipe is made with vital wheat gluten that is simmered in a rich brown broth allowing the gluten to absorb the beef like flavor as it simmers. It is an excellent homemade gluten recipe that is high in protein, low carb, and low fat. It makes a delicious vegan meat substitute for those who prefer to not consume animal protein.

❤️ Why you'll love it

✔️ Its far more cost effective to make your own seitan dough than but buy it pre made in the store.

✔️ This plant based steak recipe a great way to get protein in the diet when you're not a meat eater!

✔️ You can use this mock meat in most recipes you would use for regular steak.

Vital Wheat Gluten, is the most important part of this recipe. This is the flour that is what is used to make this vegan steak recipe.

Liquid aminos, is a liquid protein concentrate made from soybeans that is often used like soy sauce.

Hickory smoked dried torula yeast is what gives the gluten steaks a smoky flavor. It is completely vegan, sugar, and salt free.

George Washington rich brown broth powder, this gives it a deeper flavor and is similar to a beef broth powder but is vegan.

Vegemite, a yeast extract in paste form. It is high in B vitamins.

Instant coffee, this is the brand I use.

Vegan seitan steaks can be stored in an airtight container making sure the steaks are covered completely in the broth it was simmered in. I keep this in the fridge for up to 2 weeks and freeze it for up to 3 months.

What is vital wheat gluten?

It is a super fine powdered flour that is all gluten and very little starch. It really is not a flour, but it is made from wheat flour that has been hydrated to activate gluten. Then, it is processed to remove everything but the gluten, is dried and ground into a powder.

How much protein does vital wheat gluten have?

Just ¼ cup of it contains 23 grams of protein, 4 grams of carbohydrates, and 0 fat. As a result, it is a great substitute for vegans who want to follow a low carb diet. Gluten is considered safe to consume by all unless you have celiac disease and are gluten intolerant. It can cause stomach pain and bloating.

Are seitan steaks and gluten steaks the same thing?

The final product is basically the same, but the cooking method is different. Some seitan recipes call to wrap the gluten in foil and steam it. This recipe is simmered in a vegetable broth to give it flavor

No, this vegan steak recipe is not meant to taste like the real thing.

These steaks are delicious battered and fried in a frying pan and served with a generous portion of mushroom gravy and mashed potatoes or mashed cauliflower.

Don't forget to check out my Amazon storefront for some of my favorite products!

If you love this recipe, please leave a ⭐⭐⭐⭐⭐ rating 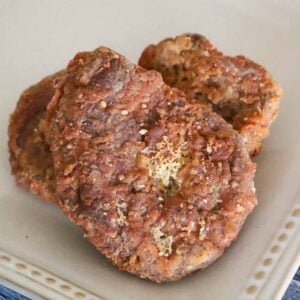