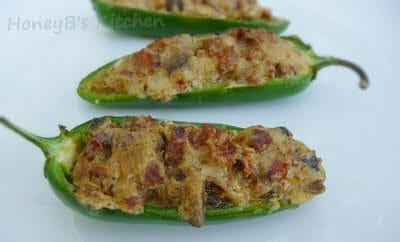 I love poppers.  You know, those deep fried jalapeno's with cheddar or cream cheese in them?  :o)  I just don't love the calories.  I've been eyeing the recipe in Cook This, Not That for Stuffed Jalapenos.  They looked so appealing in the book I had to make them.  I knew Grumpy probably wouldn't eat them but I still wanted to make them.  However, these were not as spicy as I expected....if spicy at all!  Maybe my heat tolerance just keeps getting stronger.  The peppers before cooking had heat but after they were cooked, I just couldn't feel the heat like I did before cooking.  The filling?

Oh my goodness.  It is amazing.  Grumpy and I were literally eating spoons of the filling that was left over after stuffing the peppers.  He said the filling was awesome but he still wouldn't eat a pepper, even after I told him they weren't hot.  I think he didn't believe me.  ;o) 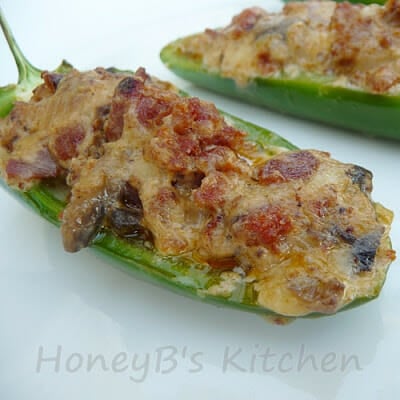 These were definitely worth heating the kitchen up for however you could probably cook them on the outdoor grill also.   I traded heating the house up some rather than being outside in the heat.  At least I have AC and could go to a different part of house to keep cool - or stand near the AC vent!  I would definitely make these again.  I have never used chorizo in cooking although every time I would watch Rachel Ray use it I would think I need to try this stuff!  This recipe was my chance.  I looked for two weeks before I finally found it though.  I literally found a vegetarian version before I found the real thing!  Chirozo is some good stuff!  If you can't find it, you could use any other type of sausage...turkey sausage would work and you can use any flavor sausage (like the Buffalo Chicken Sausage..yum!) you like in my opinion! 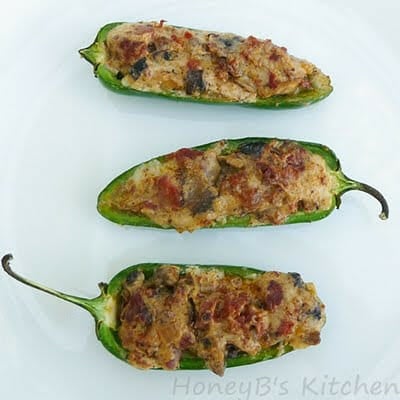 Cook the chorizo over medium heat, stirring with a wooden spoon, until oils begin to release and sausage starts to crisp up.  Remove chorizo from skillet.  Place mushrooms and onions in skillet and saute until waters release and onions become transparent.  Return chorizo to skillet and stir to combine.  Remove from heat.

Measure out cheeses and add sausage mixture, stirring to combine.  Stuff each pepper with a spoonful of the cheese mixture and bake 15 minutes.