275 shares
A low carb vanilla cupcake batter with coconut flakes baked in and frosted with a creamy and delicious lime butter cream frosting.

These Keto Coconut Cupcakes are a vanilla flavored dessert made with almond and coconut flour. They are sprinkled with unsweetened flaked coconut in the batter, and, once baked and cooled, they are frosted with a sugar-free Lime Buttercream frosting. Making these keto cupcakes a delicious combination of coconut and lime!

Easily portable, Keto Coconut Cupcakes with Lime Buttercream Frosting are a great choice for picnics, potlucks, and birthdays! Everyone will love these hand held cakes full of coconut and lime!

I love my cupcakes. And, having said that, I am prompted to want to bake all of my favorite recipes the keto way now. A favorite non-keto cupcake recipe of mine is the Coconut Cupcakes with Lime Buttercream Frosting. As a matter of fact, if your family is not keto, you may want to make that recipe for them and keep this keto coconut cupcake to yourself!

I was missing my coconut cupcake lately. So, I made an attempt at keto-izing the original! The keto coconut cupcake version turned out on the first try! And, as a result, the whole dozen of them were gone in just a couple of days. I would say that is a big baking win for me!

How Did you make these Coconut Cupcakes Keto Friendly?

How did you convert your non keto cupcake recipe into a keto version?

I substituted almond flour for the regular flour, removed the cornstarch, added coconut flour and xanthan gum instead for thickening agents. I also increased the baking powder in the recipe.

Can I make these Keto Coconut Cupcakes dairy free?

Why do you bake keto cupcakes at a lower temperature?

These Keto Coconut Cupcakes are baked at a lower temperature to prevent burning. The almond flour will tend to burn before finishing baking if you do so. These cupcakes took 40 minutes to bake, at 350, the tops would have burned.

Can I use coconut milk instead of coconut cream?

I have not tried this, but think it may work. However the coconut milk is thinner than the coconut cream and you may not need as much of it if you substitute. I can't guarantee your success with the recipe if you do substitute.

Start your cake batter by creaming together softened butter and Swerve granulated sweetener.

Once the sweetner and butter have been creamed together, add eggs, one at a time, mixing well after each addition. Next, place the dry ingredients into wet ingredients bowl and blend well using a hand mixer. Add coconut cream and blend until creamy.

Using a ¼ cup scoop, place 1 scoop of batter into baking pan lined with cupcake papers. Bake for 40 minutes at 325, or until cupcakes are lightly browned and toothpick test comes out clean.

Remove the cupcakes from oven and cool in baking pan for 10 minutes.

Cream together the cream cheese, lime juice, and Swerve Powdered sweetener for frosting.

The following are affiliate links. We are a participant in the Amazon Services LLC Associates Program, an affiliate advertising program designed to provide a means for us to earn fees by linking to Amazon.com and affiliated sites.

I love my silicone baking pans! Silicone makes making your keto cupcake dessert easier when removing your baked product. Keto cupcakes are more fragile and silicone doesn't stick. You can easily remove them just by pushing up on the bottom of the cup and your cupcake will pop right out!

What to serve with Keto Coconut Cupcakes with Lime Buttercream?

I love how portable these cupcakes are, making them a perfect make and take dessert. These would be great to bring along to your next picnic, potluck or reunion along with this Chopped Taco Salad! 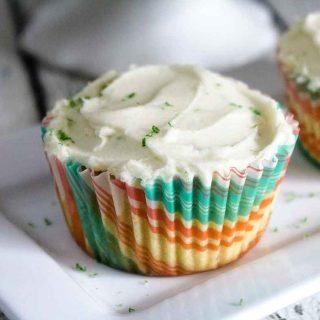