49 shares
Venison in Mushroom Gravy over Egg Noodles is a very thrifty recipe. Made with only 4 ingredients it makes an easy and economical meal for the table.
Jump to Recipe

Grumpy's Recipe - Venison in Mushroom Gravy over Egg Noodles is one of two recipes that Grumpy will cook for me! 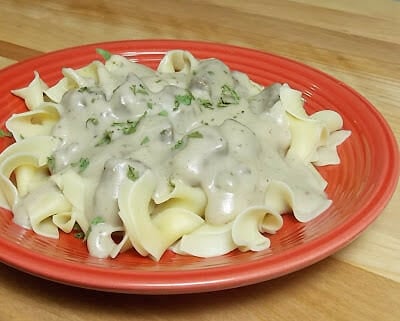 Grumpy will cook few meals.  He will make his Bachelor's Pasta, Frozen Ravioli (not really cooking eh?), and Venison meals.  Mostly he will be the "overseer" of the venison steaks on the stove.  God forbid that I do something wrong with it is what I figure.  When it comes to Venison, Grumpy likes to think he's the expert I guess and he probably is since he's the one who brings it to the house to begin with.  Still, I don't think I'm that bad with it.  After all those venison dumplings turned out pretty darned yummy.  🙂

Most of the time when Grumpy would talk about making this dish I would turn my nose up at it.  Yup.  I can be a canned soup snob.  I tend to never use it unless I'm making green bean casserole, and that is only because I'm too busy to make my own cream of mushroom soup.  I literally only make the green bean casserole once a year also.  However, since my life has been so busy, and it can be 6:30-7:00 pm before we actually eat most nights because of the time frame I get home, I agreed to let Grumpy make his recipe that uses Cream of Mushroom Soup. 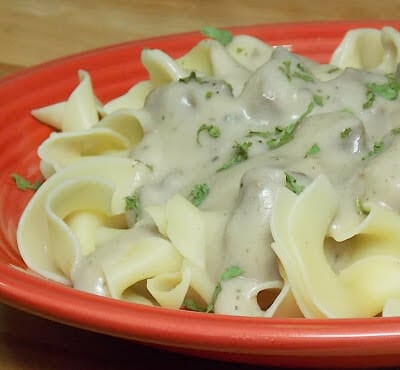 Now for my next confession.  Not only can I be a soup snob, I'm even worse when it comes to condensed soups.  I will not use any thing other than Campbells if I have to use a canned soup.  When you open their can it looks fresh.  Have you ever bought a no name brand of soup to open it and only find a fine film over the top of the soup and clinging to the can.  Yeah.  Another reason I'm turned off of canned condensed soups.  However, with Campbell's, I tend to not notice that soup "symptom".

Ok, ok, now that I've totally turned you off of condensed soups (except Campbells of course!), I will share with you Grumpy's recipe that uses it!  Quite the way to win you all over! 😉 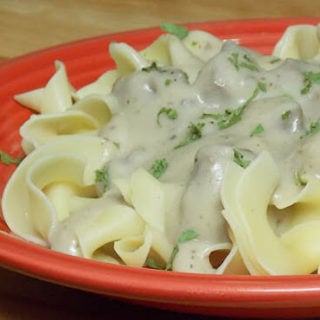 An easy recipe when short on time.  If you don't have venison, you can use beef or chicken.  You can also use ground beef or turkey instead of meat chunks.