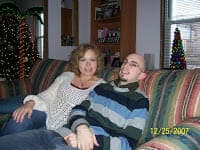 I have so many different memories that I have decided that I need to put them in writing. Today I will start with one of my most favorite memories of all time.

This is a Christmas memory of my children - specifically Justin Michael! Justin was in 1st or 2nd grade when he started to question whether there was a Santa Claus. He was taking a bath one day when he hit me with the question "Mom, does Santa buy Avon?" lol, he caught me by such surprise! I told him Santa got his gifts from everywhere! Well, I had been adamant that the kids were not getting game boys for Christmas and I decided it was time to put some belief back into my child's life. Both of my children wanted them badly, but I had told them the only way they would get a game boy would be if Santa brought it for them. Christmas morning came and Justin & Chris started to open their presents. When Justin opened his game boy - his proclamation was "There really is a Santa Claus! Even if for just a few more years, I put belief back into my son's life. To see their happiness and joy was the most rewarding present I ever could have had in my entire life. Now they are grown boys and to watch them with their struggles makes me wish they could be little again with no worries in the world.