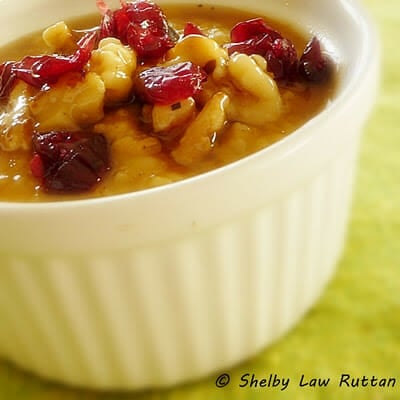 I have been on a steel cut oats kick lately.  Partly because contrary to my last post, I have been attempting to cook in a healthier way for my Grumpy.  We found out recently that his cholesterol was way too high and with the stressful life we lead, that is not a good thing.  The Sauteed Steel Cut Oats with Cranberry Infused Maple Syrup was my first try with something out of the ordinary - and it was a big hit here.  So much so we have had it several times since I first made it.

Leslie of The Hungry Housewife grabbed my attention to her Pumpkin Pie Oatmeal which I had to try.  I did and loved it and of course the next time I made it I had to change it up and make sure I had some maple-y goodness in there too.  I just to have maple syrup with certain things, and oatmeal is one of them.  After all, I am a country girl who was born and raised in a maple producing area, I had to do something with the maple walnut thing!

Grumpy tried the oatmeal and really didn't care for it which kind of surprised me because he loves pumpkin.  I loved it but I had to make just regular oatmeal for him. He is pretty picky if you ask me so I really shouldn't have been surprised, however, at least he gave it a try!  I ate mine the way you see it here.  Grumpy made toast with peanut butter, mixed some brown sugar in his oatmeal and ate it on TOP of his toast!  I thought that was weird, however he was eating healthy so I didn't gripe that he didn't like my oatmeal.  Which way would you prefer to eat your oats?
Pumpkin Spiced Steel Oats with Maple Walnut Cream & Cranberry Topping
Author: Grumpy's Honeybunch
Serves: 6 servings
Ingredients
Instructions
3.4.3177