3 shares
And the winner is.......
Beth of Cookie Pie!
Congratulations! You will be hearing from me via email soon! 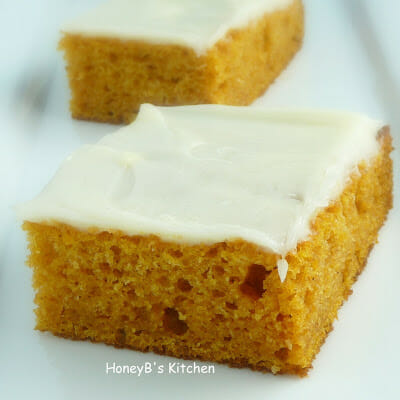 There are all kinds of pumpkin bar recipes out there. I was bound and determined that the recipe I made was not going to be full of oil. The first recipe I made did not turn out. I was really disappointed because it was from my favorite cooking source - Cooking Light. Well, I guess I can't say it didn't turn out - but it didn't turn out the way I wanted it to. I ended up tossing it. I'm not sure if it was the recipe or if it was just me but it didn't rise and it was kind of "gummy". If you made the CL recipe (here) let me know how yours turned out? I'd like to know what I did wrong because others in the reviews said they made it as stated and it turned out great for them. I do know I am not the only one who made it and it didn't turn out.

I finally decided on a recipe from allrecipes.com but of course, I didn't follow it completely (original recipe here). It called for a full cup of oil and I just can't find it in myself to make a cake with that much oil in it. Someone in the reviews had mentioned subbing applesauce but I had some greek yogurt in the refrigerator so I went with that in place of the oil. I didn't get a "cakey" texture - you know the "crumb" look? Grumpy called it more like sponge cake texture but said it was light and good (and he ate two pieces last night while we watched a movie!). It turned out de-lic-ious! For the frosting I went with the cooking light recipe they had with their recipe for pumpkin bars. 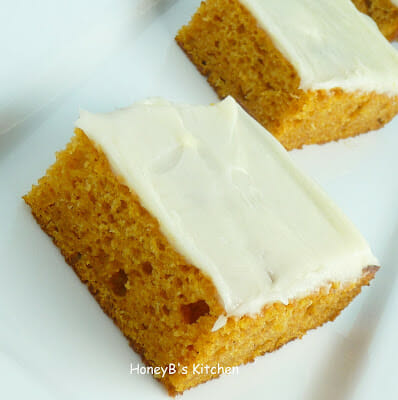 In another bowl, combine flour, baking soda, cinnamon and salt. Add these dry ingredients to the pumpkin mixture, and beat until well blended. Pour batter into a greased 15 x 10 inch baking pan.

Bake at 350 degrees for 25 minutes, or until cake tests done. Cool.