5 shares
This easy recipe for oil pie crust will give you a tender, flaky dough that is perfect for sweet and savory recipes.
Jump to Recipe

This Oil Pie Crust recipe is super easy to make with just 3 ingredients. The pie dough bakes up golden brown for a flaky pie crust that is oh so delicious! It is perfect for fruit pies, savory tarts, pot pies, and more!

Unlike a traditional pie crust, this recipe uses oil taking away the theory that you need super cold butter or solid shortening to get a tender crust that is flakey. My mom received the original recipe from someone close to the family well over 40 years ago and I would have to say she has perfected her crust making skills.

❤️ Why you'll love it

✔️ This pie crust is made by hand and turns out the most tender flaky crust imaginable!

✔️ It can be wrapped in plastic wrap and stored in the fridge until you are ready to use it, or it can be placed in a pi

Flour sifter, mom always sifts the flour for this recipe.

Rolling pin, mom uses a wooden rolling pin (the same one I use!).

Wax paper, the pie crust is rolled between the wax paper. It help keep the fragile pie crust from breaking easily. Alternatively you can use cling wrap or parchment paper.

Store unbaked pie shells that wrapped tightly in the freezer until ready to use.

When ready fill the pie crust, remove it from the freezer and allow thaw slightly, just until the pan is not ice cold. Don't place a frozen pie shell directly into the oven unless it is in a heat resistant pie dish.

Can you use coconut oil to make pie crust?

Yes, as long as it is in liquid form.

Don't forget to check out my Amazon storefront for some of my favorite products!

If you love this recipe, please leave a ⭐⭐⭐⭐⭐ rating 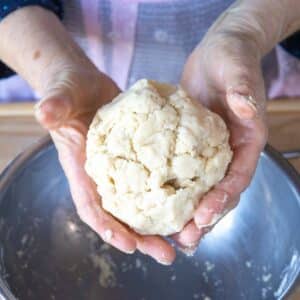