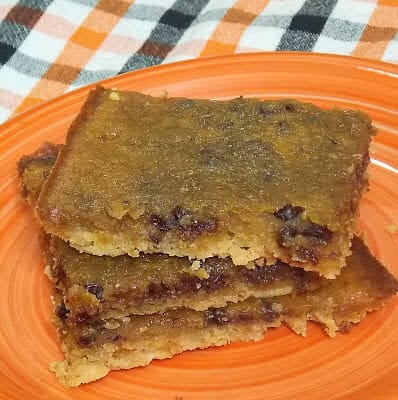 The original recipe, Gooey Chocolate Chip Peanut Butter Bars, found on allrecipes.com, was one of the recipes we could make, photograph and review this month as part of the Allrecipes Allstar Ambassador Program.  Karo, one of our products to use this month, is the provider of the recipe on AR.  I had completed my activities, but of course, just because my month activities were complete, it did not mean I wouldn't be cooking or baking anymore this month! 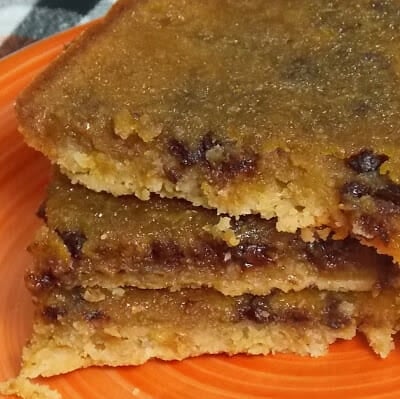 Yesterday, while Grumpy was in the woods, stealthily seeking big game to target with his bow and arrow, I was home with a headache of all headaches.  I spent a good amount of time on the loveseat with Lifetime Television.  When I knew it was time to have to start making dinner I went to AR and happened across the bar recipe and thought, this would be yummy as pumpkin.  While I may have followed suit and made the bar as presented, I was out of coconut and didn't want to make it as written and not have the coconut.  So, I got rid of the peanut butter and coconut and in came my canned pumpkin.  Twas not a mistake my friends.  These are some pretty tasty bars and I will probably make them again!  I used the 13x9 pan as the recipe suggested, but next time I will go with a 9x11 as I felt the bars were way too thin and could have used a bit more height to them.

If you're not pumpkined out, then try these for sure.  If you are, then why don't you go with the original?

Bake in a preheated 350 degrees F oven for 15 to 18 minutes or until crust is lightly browned.

Bake an additional 20 to 25 minutes, or until mixture is golden. Cool on wire rack and cut into bars.