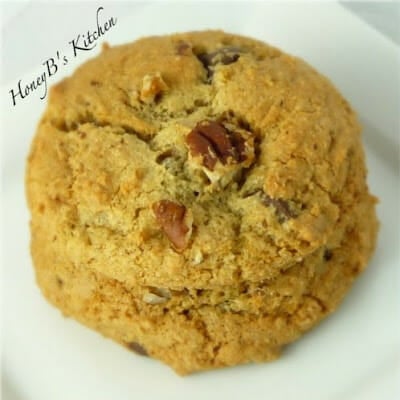 I procrastinated in making my family recipe for this month. Mostly because I wasn't sure what I wanted to make. I should have made Nanny's Sugar Cookie and decorated them for Christmas but I just didn't "feel" like it. Then, this morning, I had an email from Lynda who thought maybe she had missed my recipe for this month! I had to fess up that I hadn't made anything yet and that I would work on it today! 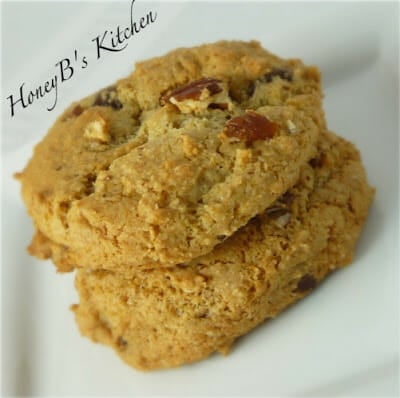 I looked through all Nanny's recipes and came across one for the Chocolate Chip Cookies pictured in the photograph's above. I had never made this recipe and I probably have never had it before either. Nanny didn't make Chocolate Chip Cookies as often as she made her soft sugar, ginger or pineapple cookies. She would make them sometimes and I do remember one time we made them together but she used the recipe from the back of the chocolate chip bag! Maybe she didn't like the recipe below? Maybe she forgot she had this recipe? Or, maybe it was just easier to use the recipe on the chocolate chip bag! I don't know. But, I wanted to make it because it was in the pile of recipe cards that Nanny had. 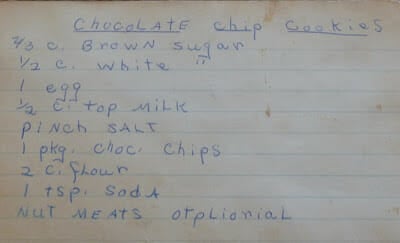 The recipe written on the card is all that was there. When my Aunts and I got together to photograph these recipes we were all puzzled as to whom the handwriting belonged to because I wasn't any of ours, wasn't my mom's and certainly wasn't my Nanny's. We are thinking it may have been my Great Grandmother Lottie Clark who wrote this recipe out, and after reading the recipe I think we could be right.

When some of you read this recipe you may wonder what top milk is. If you grew up on a farm or around a farm, you might know. Top milk is the cream that rises to the top of the milk. When I was very young (but old enough to remember!) I had milk straight from the bulk tank at my Uncle Jimmy's. I didn't really care for it because it was unpasteurized and tasted too much like how the cow smelled to me. Now don't laugh cause it's true!!

Since the recipe called for top milk and all I have in the house for the most part is skim milk I went ahead and used heavy cream I had left over from holiday recipes. I figured that was the closest I was going to get to top milk although probably richer since top milk would have some of the milk from below get mixed in when you took it out of the milk can! Yes, I am so old I remember the day's that milk was picked up by drivers who would collect it in a milk can. ;o) My Aunt Pat (who passed away way too young) used to be one of those drivers who collected the milk cans! 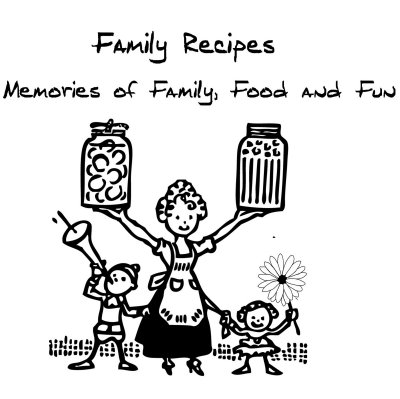 This is my submission for the Family Recipe event that is co-hosted with Laura of The Spiced Life and Lynda of Lynda's Recipe Box. The round up will be sometime after the end of this month and can be found on Lynda's blog!

You may also notice there is no butter and no vanilla in this recipe. If I made these again I would probably put some vanilla in for flavor. My instinct was to do it anyway but I wanted to taste the recipe as close as I could to how it was written. Now, pay attention to this next statement....if you do not like crunchy crisp chocolate chip cookies that you can dunk in your milk....then this recipe is not for you! Grumpy won't even eat them because they are crunchy. I would eat it with a glass of milk and dunk my cookie or I would dunk it in my tea.

There were no directions on how to mix the recipe I will tell you below how I put them together.

These cookies do spread out. I wasn't sure if they would or not when I put them in so I put the first batch in and told myself if they didn't spread out that I would flatten them some when I put the next batch in. Didn't need to do so! This recipe made 30 cookies.