This Chipotle Chicken Skillet Recipe is made with tender and delicious chicken breasts simmered in tomatoes with onions and garlic. A delicious meal in 30 minutes all in one dish!

Have you ever started to make a dish and then find out you don't have all the ingredients that you thought you had? That is exactly how this Chipotle Chicken Skillet recipe came to our table.

I was making a dish that called for a can of diced tomatoes. I always have diced tomatoes in my cupboard, or so I thought! It turned out the night I made this recipe, I only had chipotle flavored tomatoes.

Adapting the recipe midway through cooking!

After more digging I finally realized I had to change my plan. The chicken was already in the pan cooking....so I decided what the heck. I'll use the tomatoes with chipotle and just wing it. That is when I realized that many times when I do have to "wing it" that I end up with something I really love!

Grumpy did enjoy it, but I was told I don't have permission to cook chicken anymore. Ha ha, right. If he wants me to make something other than chicken now, he can either help me decide what to have before dinner, or just keep quiet about it and eat. I will admit I have made a lot of chicken lately....but only to you. I'll never admit that to Grumpy!

What to serve with Chipotle Chicken Skillet recipe

When I first made this Chipotle Chicken recipe I served it over rice. However, if you're not a rice fan, these Mashed Potatoes with Garlic and Onion recipe would be delicious, or if you want a complete low carb Keto recipe, try serving it with Garlic Mashed Cauliflower.

While Grumpy isn't the biggest fan of chicken, we need variety with our weeknight meals. So, since I am the cook, I create chicken recipe to do just that!

Some of my favorite recipes that are easy to make and are full of flavor are made with chicken! Chicken Thighs with Cilantro Sauce and Sweet Chili Lime Chicken are two of my very favorites! 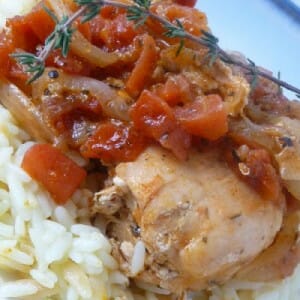