I've been thinking about waffles lately. Its been so long since I've made them - years in fact. The recipe I used to make was a really healthy one but I knew Grumpy would turn his nose up at that recipe, so I went on a search on allrecipes.com. I found one for Deluxe Waffles - not too bad, but not one I will probably make again. Its pretty basic and probably one little kids would gobble right up. Grumpy didn't complain so that goal was met. Maybe next time I'll sneak in the healthy recipe and see what happens. he he. I did make turkey bacon this morning in an attempt to not have so much fat in our breakfast. It wasn't bad, not bad at all!

Here is the recipe I followed: 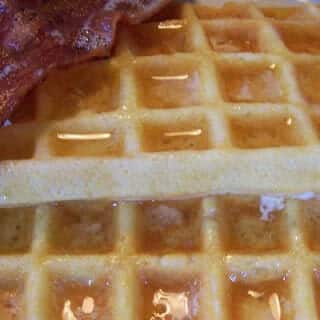 In a large bowl sift together the flour, baking powder, salt, and sugar. Make a well in the center of the bowl. In a separate bowl, mix together the egg yolks, milk, and oil. Pour into well of flour mixture and stir well. Stir just until ingredients are moistened. In a small bowl, beat egg whites until stiff. Fold into batter. Cook batter in waffle iron.