Pumpkin Spice Cinnamon Rolls are soft and tender yeast buns with pumpkin puree in the roll dough. A sweet brown sugar mixture is spiced with pumpkin pie spice and rolled up with raisins inside. A baked fall treat drizzled with a rum icing made with confectioners sugar and rum. I love this recipe and will make it every fall!

Whether you're looking for something to enjoy at brunch with your family, or an afternoon treat to enjoy with a hot cup of coffee or tea, these Pumpkin Spice Cinnamon Rolls will be sure to please! This recipe makes very large, soft and tender rolls that are full of pumpkin flavor.

I love pumpkin! Because of this, when I knew I had a friend coming to visit for the weekend, I wanted to have something special for her. I had had a Pumpkin Cinnamon Roll recently and decided it was the perfect time to try making them myself.

Because we don't necessarily eat vegan all the time, I decided to try this recipe with an egg instead of the flax egg. I found that the rolls were super puffy this last time, but other than that, I could not tell the difference between the two.

Prepare the yeast per instructions. Combine the dry ingredients in one bowl and the wet ingredients in another bowl. Then, add the yeast and pumpkin mixture to the kitchenaid mixer with a dough hook attachment.

Gradually add the flour mixture, 1 cup flour at a time, to the pumpkin mixture. Scrape the sides of the mixing bowl to be sure all ingredients are incorporated.

Once dough mixture is smooth, turn out onto a floured surface and knead a few times.

Place in a well greased bowl and set aside to rise until dough rises to double its size.

While the dough is rising, mix together the walnuts, raisins, cinnamon, and brown sugar. Set aside until ready to fill the roll dough.

When the has doubled in size, remove from bowl and roll out to size.

As you cut the buns, place them in a baking dish that has been sprayed with cooking spray. Cover, and let rise for 30 minutes or until almost doubled in size.

Bake the rolls in a 350 degree oven for 30 minutes, or until lightly browned. Remove from oven and let cool for 15 minutes. Drizzle icing on top if desired.

*If you made this recipe, please give it a star rating!* 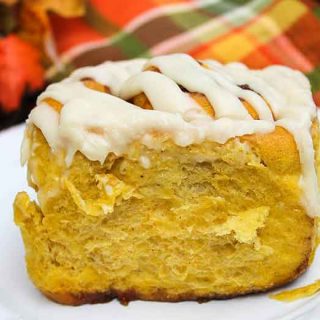 For the Roll Dough: