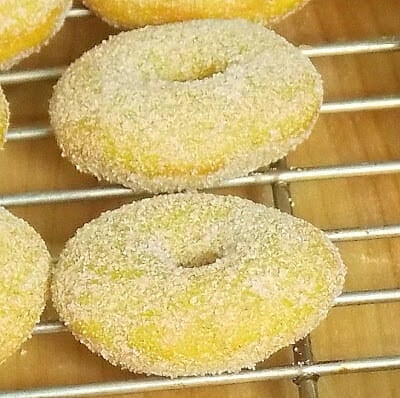 When I was on blogger the other night I noticed that my friend Lisa of Jersey Girl Cooks had blogged about the pumpkin doughnut recipe she found on King Arthur Flour website.  Most foodies are in a pumpkin mood at this time of year, yours truly certainly not excluded!

The next morning I was up early and happened to go on Facebook only to see Lisa's doughnuts in my face again.  Instead of staying on the couch, I decided to get up and make these doughnuts.  I figured if Grumpy was heading to the office, he could take the treats to work with him.  However, as fate would have it, Grumpy wasn't headed to the office that morning, so he got a few for his lunch box and the rest made it to work with me.  If you have read my blog since the beginning, then you know that when I started out blogging, I was no stranger to getting up early and baking muffins, cupcakes, cookies, whatever I was in the mood to make and take to work to share.  Since I have been getting better sleep lately (a good 8 hours for the most part, and yes that means I'm to bed early like the old woman that I am), I have felt more like my old self. 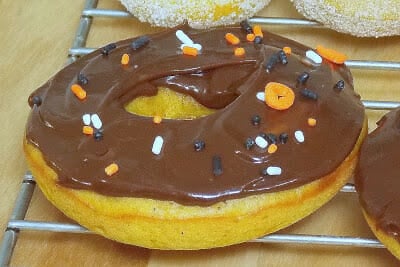 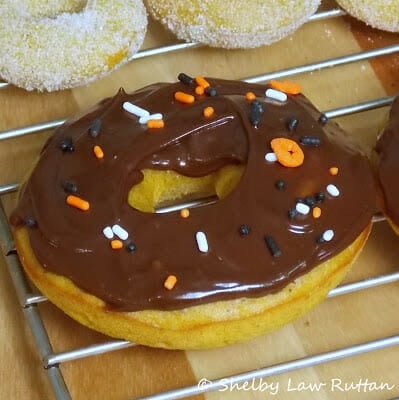 I have to admit, that I do believe this is the best baked doughnut recipe I have made so far, and I have made a few!  Of course, it could also be because I'm quite partial to pumpkin, but Grumpy's response was that they were the best baked ones also.  When he realized what I was making was baked doughnuts, he at first turned his nose up at them.  However, I still gave him some for his lunch box and when I asked him later that night, he said the were good, "probably the best baked ones to date".  Ok, you can't expect more from Grumpy, remember now, he's picky.  I will give him credit for being more adventurous than he used to be, but he's still pretty plain when it comes to food.  If you ask me how these were, I'd say they were pretty freaking yummy.  :o)

Please read the recipe to the end if you are looking for the WW Points Plus information!  Note that the original recipe calls for 1-½ cups of sugar.  I felt it wouldn't need that much, especially if I was frosting and sugar coating some.  I reduced the amount to 1 cup.

Baked Pumpkin Doughnuts
by October-27-2012
Ingredients
Instructions
Preheat the oven to 350°F. Lightly spray doughnut pans with cooking spray.  If you don’t have doughnut pans, you can bake these in a standard or mini muffin tin.Beat together the oil, eggs, sugar, pumpkin, spices, salt, and baking powder until smooth.  Add the flour, stirring just until smooth.Fill the wells of the doughnut pans about ¾ full; I use a piping bag to pipe the batter into the doughnut pan.  Bake the doughnuts for 15 to 18 minutes, or until a cake tester inserted into the center of one comes out clean.WW Points Plus:  1 mini doughnut = 2 points

I recommend this is the way to go if you are following WW program.  If you are not, feel free to make the larger doughnuts and frost them.  With my calculations, just 1 regular sized doughnut would be 7 points.