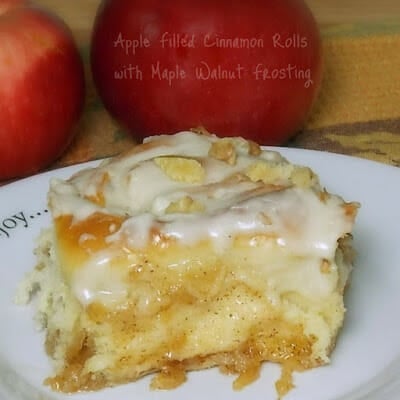 One of my favorite indulgences ever is cinnamon rolls.  I look at pictures and drool and want.  Usually I do not make because it only means that it has to be devoured and just one is never enough. That was the case with these apple filled cinnamon rolls I found over at An Opera Singer in the Kitchen.  Noelle, the author of this awesome blog, truly is a singer and you can read all about her here!  I was fortunate enough to have received Noelle's blog for my Secret Recipe Club assignment this last month.

I knew that this time around I wanted to bake something and I absolutely love pumpkin. Noelle has 3 recipes on her blog that I have bookmarked to make - Pumpkin Fritters, Pumpkin Spice French Toast, and Fluffy Vegan Pumpkin Biscuits.  However the winner ended up being nothing pumpkin but something I absolutely can't resist, Apple Filled Cinnamon Rolls!

As you can tell, from the title of my post, I did change this recipe up.  I decided to not make a vegan version and wanted to add maple and walnuts to the mix. 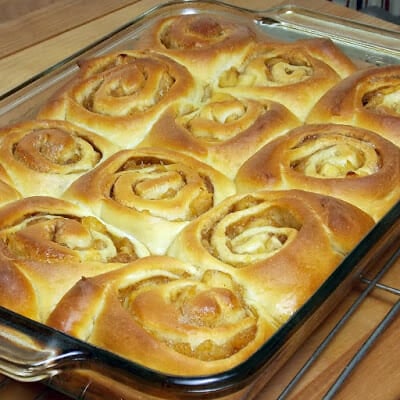 I liked the idea of an apple filling in the rolls.  I felt it would help to keep them moist as well as taste delicious!  I made my own apple filling with apples I got from my Field Goods package.  I love the filling!  I did use real butter and that buttery taste was just too good to resist. 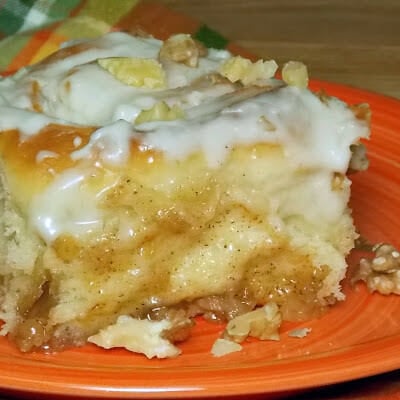 After Grumpy ate his first cinnamon roll, he went out into the kitchen and got seconds.  I didn't realize his seconds also included the half portion of what was left of the roll I took as I went out to get my other half and he had not only taken another huge roll, but my half!  These did not go to waste by any means!
Other apple recipes you may enjoy!
Apple Filled Cinnamon Rolls with Maple Walnut Frosting
Author: Grumpy's Honeybunch
Prep time: 1 hour 30 mins
Cook time: 40 mins
Total time: 2 hours 10 mins
Serves: 1 dozen rolls
Ingredients
Instructions
3.5.3208