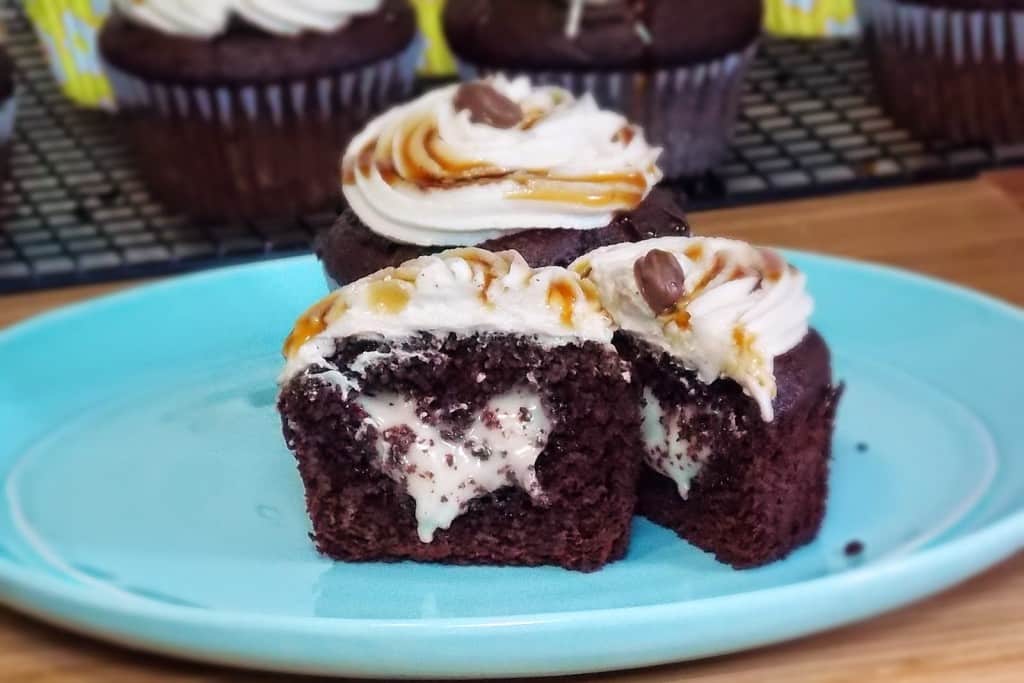 Its that time again. Time for our Secret Recipe Club Reveal and Chocolate Kahlua Cupcakes filled with a Kahlua Creme Filling became my chocolate obsession for the month. 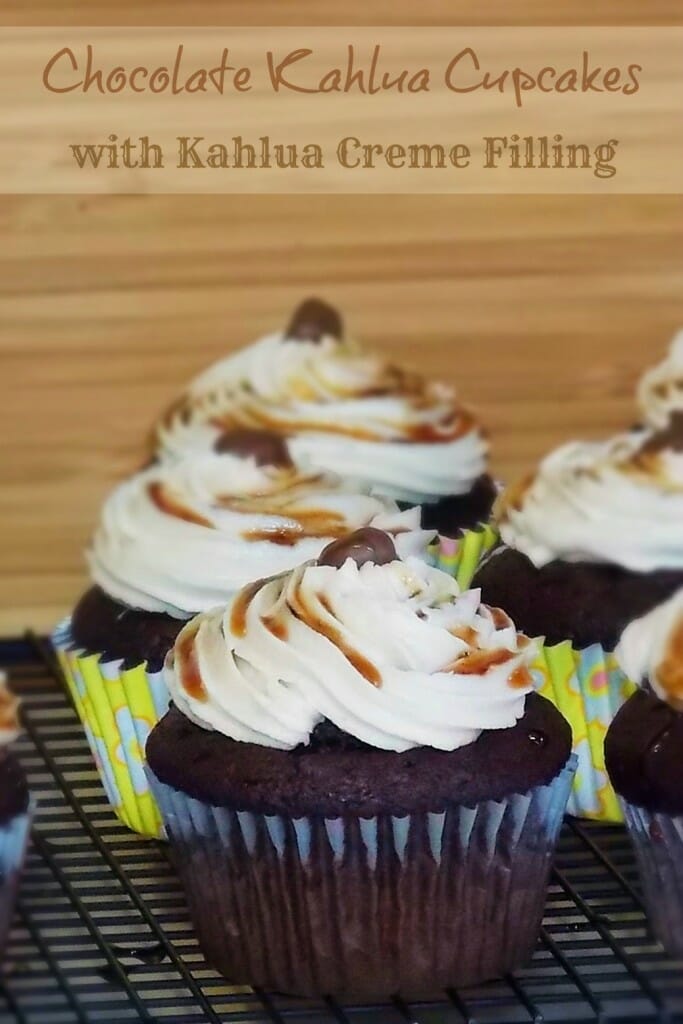 I have to admit it.  I have two bottles of Kahlua in my liquor cabinet.  How that happened, I’ll never know! However, I decided it was time to put some of the Kahlua to use.  What goes better with chocolate than some coffee flavored liquor to enhance it some?  But I had to take it even further.  After the cupcakes were baked, I felt they were a little on the dry side.  How could I remedy it and still have cupcakes besides having someone drink a huge glass of milk with it?  Well, fill it with some Marshmallow filling – flavored with ….. you got it!  Kahlua!
I didn’t have any marshmallow creme in my pantry so I went on a quick web search and found over at Angie’s blog Big Bear’s Wife, a recipe for marshmallow creme that she made with marshmallows, corn syrup and milk.  I adapted her recipe to suit my needs for the filling. 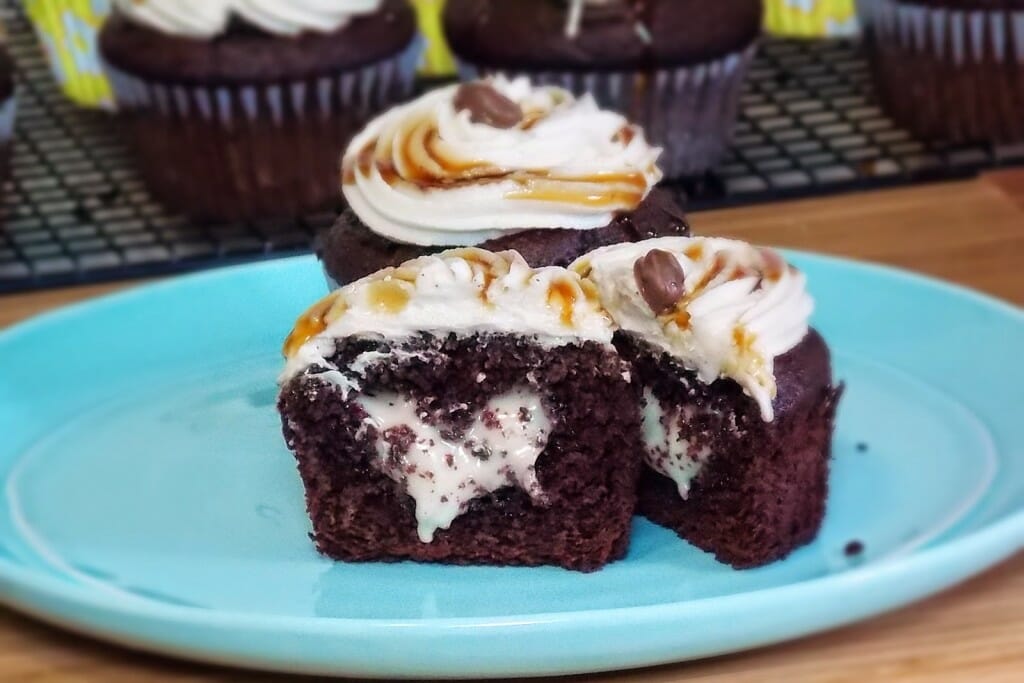 Yeah.  I didn’t stop there either.  I made a Kahlua Buttercream Frosting to top it, dipped some coffee beans in some Chocoley Milk Chocolate Dipping Chocolate to decorate the top, then as if I didn’t take it too far already, I made some Kahlua syrup and drizzled that over the top!  Yeah.  I went to extreme lengths to make these cupcakes. Grumpy even commented that it was taking me all day to make them!  I never said that I don’t go a little crazy sometimes when I start to get ideas about food.
The cupcake recipe is on the blog Saturday Evening Pot and was shared by “The Lucky Wife” (sorry, I searched the blog but could not find a name to associate with the author).  It was made with Truvia.  I’m not adverse to Truvia, but I have never used it and as I have Splenda (bags and bags of it!) in my pantry, I went with that.  I replaced part of the milk with Kahlua to help enhance the chocolate flavor and used Almond milk rather than cow’s milk.  Other than that I didn’t make any other changes.  I’m not sure why they turned out a little on the dry side.  It could be I just over baked them so I would reduce my baking time by about 4 minutes next time around and maybe even go from almond milk to buttermilk. 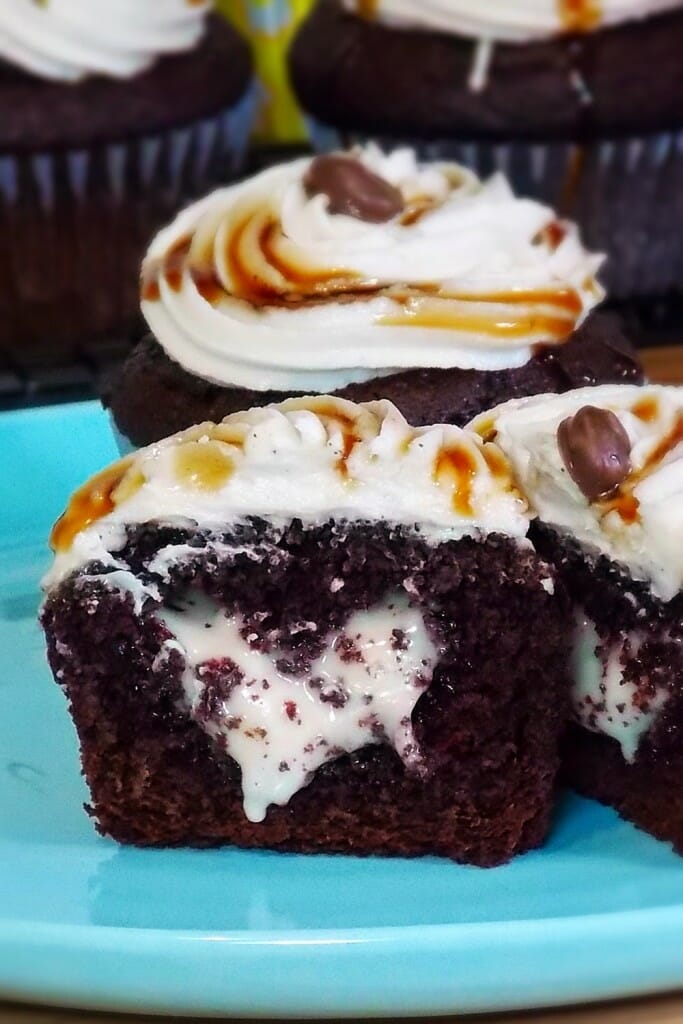 So, are you wondering what I did with the cake that I removed from the center of the cupcake?  Well, I made Bonbons!  I will be sharing that post with you soon as I used the Chocoley Dipping Chocolate to make the Bonbons.  Oh, are they ever so yummy! 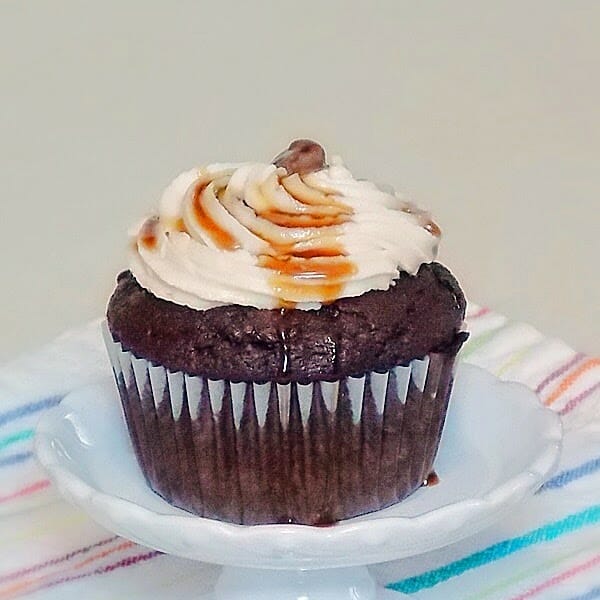 Please check out the links after the recipe post to see what all the other members of the Secret Recipe Club came up with this month!