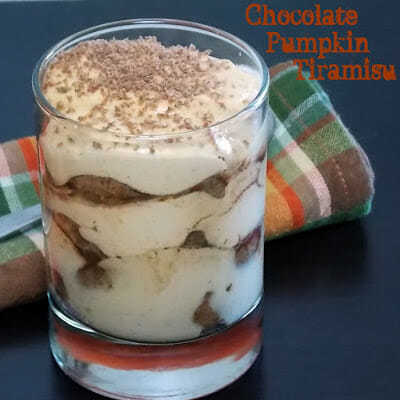 All the credit for this idea goes to Rachel Ray.  I've been subscribing to her magazine on my nook for the last year now and its because of recipes like this and the Spicy Asian Soup that I posted last January that I will continue to subscribe.  Besides, I love the look of her magazine not to mention she is also an Adirondack Girl 🙂

When cooler weather comes in, I always start thinking fall foods.  Especially foods like pumpkin. Pumpkin is one of my favorites as you can tell by the many recipes I do have on here containing pumpkin!  I also love me some Tiramisu.  So when I saw that Rachel had created this Chocolate Pumpkin Tiramisu in her most recent magazine, well, I knew I was going to make it and make it soon!

At first I thought I didn't want to use brandy as the liquor, but decided to go ahead and do it anyway.  Oh my, perfection!  There is not only brandy in the dipping liquid for the ladyfingers, but there is brandy in the pumpkin mixture that you pour over top of the ladyfingers!  A boozy dessert this is, and just the way I like em.  So, if your a pumpkin and chocolate lover, you will love this tiramisu.  If you don't like brandy, you don't have to use it, however I just can't imagine it without it after eating it with it!

For those who like to know what Grumpy thought about something out of the norm?  Well, let me just say that he loved it!  I ate half of my serving and told him he could have my other half when he came in the house. After he finished my half, he went to the kitchen and grabbed his full serving and cleaned it up good!  I won't have to worry about waste with this recipe, that I'm pretty certain of!

Chocolate Pumpkin Tiramisu
September-12-2013
While the recipe states 6 servings, it could easily be made into 8 by making this in a larger dish rather than single serving dishes.
Ingredients
Instructions
On a cutting board, coarsely chop chocolate. Whisk chocolate into hot coffee until melted. Stir in 2 tablespoons bourbon.In large mixing bowl, cream together cream cheese and butter. Add light cream, vanilla, cinnamon, pumpkin and 3 remaining tablespoons of brandy. Mix well until creamy. (this replaces the marscapone cheese that I would have used if I had - but had to make adaptations since I didn't have any!).Pour coffee mixture into a deep dish. Dip ladyfingers into coffee mixture until soaked but not soggy (about 3-4 seconds). Arrange in single layer in bottom of 6 - 8 oz glasses, breaking cookies if needed. Top layer with pumpkin mixture. Repeat layering. Grate chocolate over top of tiramisu. Cover and refrigerate for at least 4 hours and up to 2 days. Serve cold.
Details