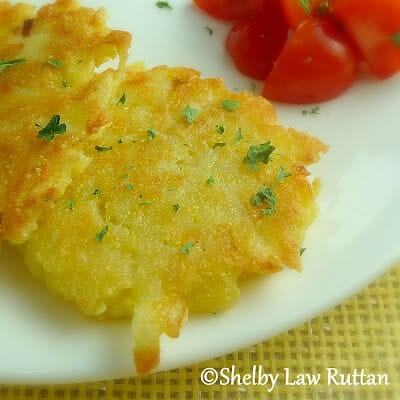 Weekends are for Hash Browns, aren't they?  Weekends are about the only time I have time to make "special" dishes.  Most of the time we eat pancakes with pure Northern New York made Maple Syrup (made by one of the best syrup making families, my cousin's!).  My dad just informed me that I have 2 gallons of syrup coming to me in the near future.  I can't wait to get my syrup and I love syrup making season!

While I didn't use maple syrup in this recipe, I did make another treat that we don't normally have on a regular basis at home.  The closest I get to a hash brown, although I hate to admit it, is McDonalds.  Then I don't know if it will be greasy, soggy, or cold.  I don't buy those too often mind you.

I decided that this Saturday morning I would make our own hash browns in honor of it being St. Patrick's Day.  I've never made them like this before and I'm pretty darn pleased with how they turned out.  They have an onion and garlic flavor and eaten directly out of the hot frying pan, they are crisp and delicious!  Like any fried food item these are best eaten freshly made.  They were quite easy to make and I will definitely keep this on a weekend breakfast rotation! This recipe was adapted from one I found on allrecipes.com for Amish Hash Browns. 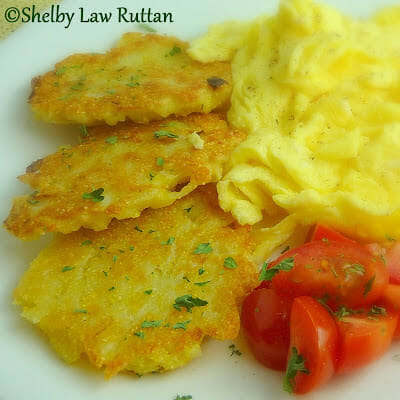 Peel and shred potatoes.  Lie shredded potatoes on a triple layered paper towel and roll the towel up tight.  Squeeze the paper towel to release water that is in your potato shreds.  Place the potato shreds in a medium sized mixing bowl.

In a small mixing bowl, whisk egg and oil.  Add to potato mixture.

In a large non stick skillet, coated with a small amount of oil, drop by tablespoonfuls into pan over medium-high heat.  Flatten patty some and cook until crisp and browned on bottom.  Flip patty and cook until well browned.  Pictured served with a sprinkling of parsley, scrambled eggs, and some cherry tomatoes!