1 shares
Here I am and right this minute, I'm feeling pretty darn good! LOL. Thanks to my friends the muscle relaxer and pain pills. ;o) Actually, I am feeling better. I know I have a few more weeks to go before I am going to be considered "ok" to go back to work, but right now, I'm pretty happy and optimistic!

Thank you to everyone for your prayers, thoughts, and well wishes. Emotionally and physically I have been drained. I felt like I was bearing a burden I didn't know how to continue to bear. We are still waiting for answers to Grumpy's health issues, but with me starting to feel better and more myself, I will be able to deal with his issues with him better than if I were in so much pain still.

I was so touched by so many messages I received and they all were greatly appreciated. Just yesterday afternoon, Grumpy came in the house and said to me, "Who do you know in the Netherlands?" LOL. I immediately knew I must have received a card from Marthe of Culinary Delights. Marthe is one awesome woman. She is so thoughtful and kind and someday will make some young man a very lucky man. Not only did Marthe send me a get well card, but she sends me one with the most adorable little kitten on it. This young girl, who lives so far away, seems to know what I like so well without even meeting me in person! Thank you Marthe!

I especially want to thank my son Justin for coming on here with his adorable post (and must I say it made me smile so big to see him say what he did!) to let you all know I made it through my surgery. I'm sure if I asked him or Kristina (or even Christopher for that matter!) to post something for me, they would have done it! Even if Justin would have had to post something "box made." lol

I haven't had much of an appetite. The surgery was done through my throat. I had to have a tube down my throat, and they also had to move my esophagus aside to get to my spine. It really is a scary procedure when you think about where they go through to get to what they need to do. BUT, I was in the most capable hands in Northern New York and he did an awesome job. I was actually only in the hospital one night. The hardest part has been the nausea from the anesthesia and the drugs. I'm not complaining about the weight I have lost from it! I do think that he should have considered a "chin lift" while he was at it though. hehe.

Right before I went into the hospital I received the Kraft Food & Family magazine. I had seen a recipe for skillet potatoes with cheese and bacon. I knew I would be making that dish as soon as I was up to it....and last night was the night. This is a very simple dish and of course, it is yummy....it has bacon! and cheese! How could it not be yummy? If your not a meat eater, you could substitute the Morning Star Farms Bacon Strips (which I think are just as yummy and better for you than the real thing). 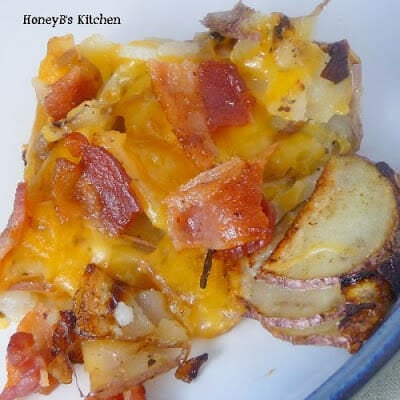 Fry bacon until crisp, remove from pan and set aside. Remove all but 1 tablespoon bacon fat from pan. Add chopped onion and cook for 1-2 minutes, then add layers of sliced potato. Season to taste, cover, and cook until potatoes are tender. Approximately 20 minutes. Stir 2-3 times during cooking time. When done, turn off heat, sprinkle cheese over potatoes, then sprinkle bacon. Let sit for about 5 minutes then serve!