11 shares
A braided egg bread that is traditionally made for the Jewish Sabbath. 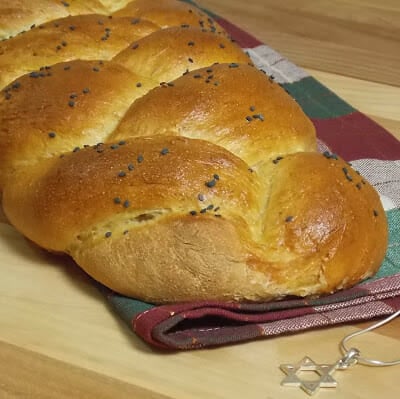 Yesterday a young girl I work with came over to bake with me.  She wanted to make Challah bread.  Although I have never made it before, I was game.  After all, aren't most of us foodies game for anything to do with cooking/baking?

Rose showed up in the afternoon,  just as I was about to put my Kale in the oven to make Kale Chips.    She was patient with me as we waited for each batch of kale to crisp up and once the kale was finished, we set to mixing the bread in the Kitchen-Aid. 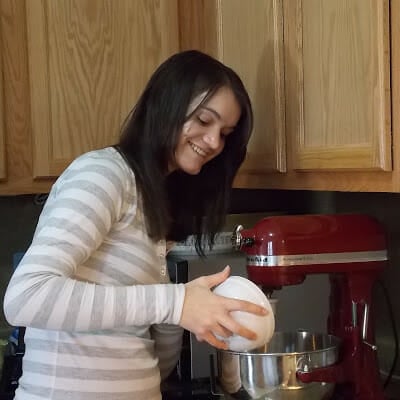 We found the recipe on allrecipes.com.  The original calls for honey but I didn't want to use what I had left of the honey so we substituted brown rice syrup.  We also used half white whole wheat and half all purpose flour.

While I knew Challah bread was a Jewish recipe, I never really knew what the background was to making it.  I was also curious as to how other people ate it.  Did they just eat it as regular bread?  Rose said she loved to spread jam on hers and another friend at work tells me she loves to make bread pudding with it.

I did a read up to see what the background of Challah bread and found that it is a Jewish tradition for the Sabbath and holidays.  They make a double loaf to commemorate the manna that fell from heaven while the Israelites were in the dessert for their 40 year wander.  On holidays, or the day before the Sabbath, double the manna would fall and the Israelites would collect twice as much so they would have enough over the Sabbath also.  We didn't do the loaves with 6 strands of bread, instead we did the 3, but will definitely make one with the 6 strands now - especially since I found that the meaning of 6 strands was a representation of the  twelve tribes of Israel (6 strands each loaf totaling twelve). 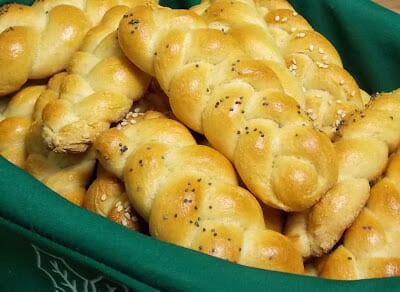 Rose told me that she had a "learning experience" while at my home baking with me which she very well may have, but it was also a learning experience for me.  While I grew up in a religious home, and I was very aware of the stories, I had no idea about the history of the Challah and that it represented the 12 tribes!  I had such a great time and I really hope to do this again with Rose and do something else new!  We will be sharing the baby Challah at work tomorrow however the 1 big loaf that we made was split between us and I'll be trying a piece this morning!