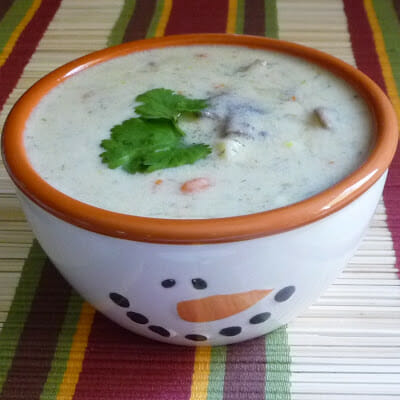 I was in a soup kind of mood. I did some looking through my allrecipes file and found one that looked good and I happened to have the ingredients (except for leeks so I used onions).

Russian Mushroom and Potato Soup has a 5 star rating on Allrecipes website. Sometimes you don't know if you can go by the rating or not because people will make the dish, make changes to it, and then give it 5 stars. I was a little hesitant about the dill but decided to make the recipe as it was written anyway to give it a chance (with the exception I did not have leeks readily available so I subbed an onion - but think it would be just as delicious with leeks). I did give it 5 stars myself, but next time I would make some changes to reduce the fat - drastically!

The cilantro on top was only for show. Grumpy actually assisted me in my photo taking this time and he said I needed some green for garnish. I was wishing I had dill, but I didn't so I went with a couple leaves of cilantro instead. Oh, and what a CHANGE in my Grumpy! He wasn't laughing at me for taking photos of my food, he was actually helping me to try and not have a glare! Drat the lighting in this house.

As I expected, when Grumpy found out it was only soup for dinner he gave his usual reaction - "what? no meat?" I came back with, "Its made with chicken broth. Have a couple bowls." he he. I did tell him if he had to have meat with his soup there was a mini meatloaf leftover in the fridge. He ended up eating two bowls of this soup though and no meatloaf. While he was on his second bowl his comments were: You could put this on your menu (talking about me running a restaurant. We always talk that way but I don't know when or how that would happen). That told me he loved the soup. His suggestion, which was my same thought - not so much butter next time. I also would use the fat free half & half. I would definitely try the leeks if they could be found in the grocery, but normally I can only find them in the spring. Of course, I hadn't looked lately, maybe they carry them year round now for all I know! I used Better than Bouillon Chicken flavored this time, - which is why it's almost vegetarian. 🙂 I do have the vegetable flavor also (and the beef!). This stuff is the best out there for broth making!

Below is the recipe with what changes I would make the next time I made it in red. 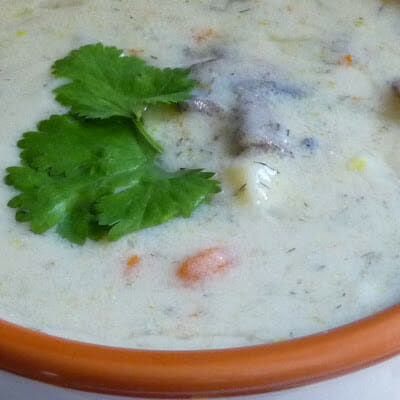 5 tablespoons butter, divided (I would cut this down to 1 tablespoon and use it to saute the onions and carrots. I would use butter spray to saute mushrooms as you don't need much butter for mushrooms anyway)
2 leeks, chopped (or onion, depending on what I can find in the grocery) 2 large carrots, sliced
6 cups chicken broth
2 teaspoons dried dill weed
2 teaspoons salt
⅛ teaspoon ground black pepper
1 bay leaf
2 pounds potatoes, peeled and diced
1 pound fresh mushrooms, sliced
1 cup half-and-half (I would go with fat free half and half next time) ¼ cup all-purpose flour
fresh dill weed, for garnish (optional) (I didn't have on hand but if I did would make a pretty addition!)

Melt 3 tablespoons butter (1 tbsp) in a large saucepan over medium heat. Mix in leeks and carrots, and cook 5 minutes. Pour in broth. Season with dill, salt, pepper, and bay leaf. Mix in potatoes, cover, and cook 20 minutes, or until potatoes are tender but firm. Remove and discard the bay leaf.

Melt the remaining butter in a skillet (or spray skillet with butter spray) over medium heat, and saute the mushrooms 5 minutes, until lightly browned. Stir into the soup.

In a small bowl, mix the (fat free) half-and-half and flour until smooth. Stir into the soup to thicken. Garnish each bowl of soup with fresh dill to serve.