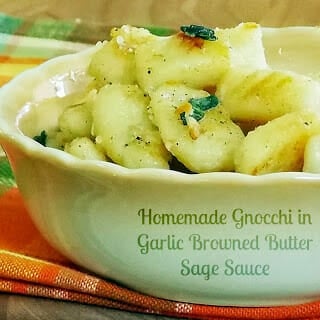 I know you wish this was on your plate right now instead of mine.  I don’t blame you.  Just looking at this photo reminds me of the crispy bits of sage, and browned salty, garlicky gnocchi that it makes me want more!  It was so delicious!

I have had the urge to make my own gnocchi lately and this recipe from Eating Well really made me want to make it more.  When I was making the gnocchi, Grumpy came out into the kitchen “famished”.  I told him if he could wait, he could have some of the gnocchi when I was done, but apparently he was wasting away to nothing and had to eat then and now!  He doesn’t know what he missed.  😉 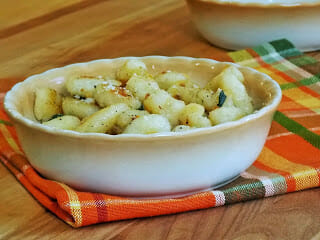 So, if your following the WW plan, can you eat this?  You certainly can!  The recipe for the gnocchi itself is 5 points per serving.  Adding the butter sauce and Parmesan cheese (which are the only other ingredients that add points to your dish) only adds one more point to your meal.  So, you can have a serving of this for only 6 points.  Pretty good lunch if you ask me.  😉  Add an apple in there (which is no points) and you should be good and full!

If you have never made gnocchi before, please don’t be afraid of it.  This is the second time I’ve made it and this time around it was even easier.  Homemade is so much better than store bought!  Don’t worry if you think they are ugly, because your not a machine, each gnocchi is going to be unique.  I roll the tines of a fork across my gnocchi once I have cut the pieces, using a little flour if needed to prevent the stickies.  Grumpy tells me I’m suppose to use a pastry bag – “that’s how the chef’s do it” he says.  He insists he saw them do it on tv that way, but I told him that you need a dimple or some lines across those babies so they will catch the good sauces that you put over it!  He insisted I needed to do it like the “chef’s do on tv”, but I told him I was my own chef and would do it my way.  😉  In any case, whatever way you do it, make sure there is something there to catch those yummy sauces!

I used this recipe as a guide from allrecipes.com but adapted it with ingredient amounts to reduce calories and points.

Prepare gnocchi according to recipe or package instructions.
Place butter in large sauce pan over medium heat. Once butter starts to bubble, place garlic and chopped sage leaves in skillet. Cook until garlic softens and sage begins to crisp.Add gnocchi in skillet. Cook over a slightly higher heat until gnocchi have crisped up. Sprinkle with Parmesan cheese. Serve hot.
Details