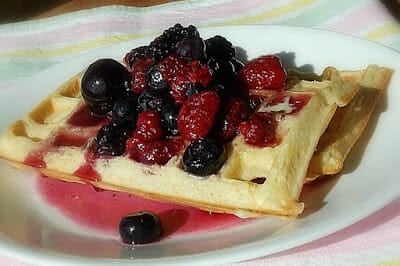 I know I've been MIA for quite some time.  After over 5 years of blogging though, a person can get burn out.  I have had so many different things going on with me that I have had no energy to think about food and recipe creating.  I am still 1 recipe away from fulfilling my AllStar duties for Allrecipes this month.  I have until tomorrow to finish up so I guess its a good thing I only have one more dish to make!

I haven't made a "breakfast" in a while.  Lately we've been living off of protien shakes, yogurt smoothies, mini bagels and hard boiled eggs in the morning.  Take your pick, its all been at the ready for us.  This morning however I was out of almond milk so there was no protien shake for Grumpy.  I had some almond/coconut milk mixture, but he wasn't up to a shake that had coconut milk.  He asked me how hard it was to make waffles and my response was "the hardest part is digging out the waffle maker".  Literally.  That can be a LOT of work!  ha ha.  So, this morning, I got a little exercise digging out the waffle maker and made us waffles.  I served them up with some mixed cherries and berries and pure maple syrup.

When making the waffles, Grumpy came out and was intently watching me put the batter in the maker.  After I closed the lid he walked away.  Of course, I can't let his watching me go unnoticed, so when he walked away, I asked "so, I must have done it right since you didn't have anything to say".  LOL Oh he cracked a grin and denied it up and down, but picky mr grump was watching me for that very reason and he can't fool me.  Besides, he denied it way too intently.  I also told him it was a good thing he didn't have anything to say about how I was cooking or he'd be cooking for himself.

Classic Waffles with Cherry Berry Syrup
Ingredients
Instructions
In a large bowl, mix together flour, salt, baking powder and sugar; set aside. Preheat waffle iron to desired temperature.
In a separate bowl, beat the eggs. Stir in the milk, butter and vanilla. Pour the milk mixture into the flour mixture; beat until blended.

Ladle the batter into a preheated waffle iron. Cook the waffles until golden and crisp.