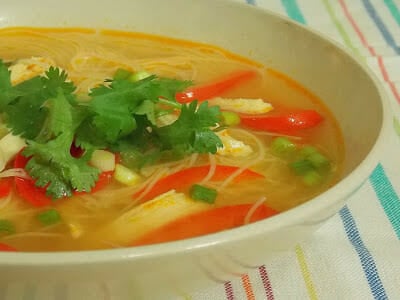 Yes.  It is the best invention ever.  Why?  Well, because I now no longer have magazines strewn all over my house!  With the exception of a few "specialty" magazines, my house is now clutter free from magazines and I will not buy the hard copies ever again!

My NOOK Tablet HD+ 16GB BNTV600 (Google Affiliate Ad) library allows me to subscribe to all my favorite magazines for a much less costly rate than buying the magazine itself - and if your one who likes to have the hard copy and you still have a nook, then I think that you can get the electronic version free for some magazines.  I won't be bothering with the hard copy though.  🙂  It also allows me to keep all my magazines neatly on my virtual bookshelf, has a bookmark page where I can quickly find recipes I bookmarked.  Then I can set it up on the counter and just follow the recipe from there....oh yeah.  I love it.  🙂
Which brings me back to this soup..... 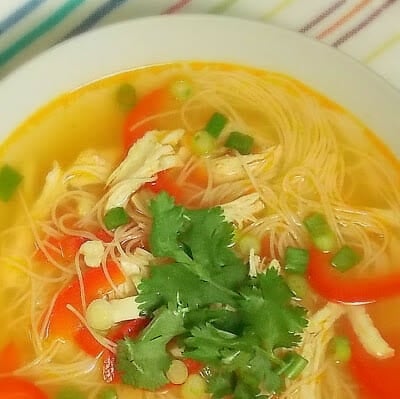 There is this place I love to go to for lunch on Central Avenue in Albany called Pho Yum. They have the absolute best Pho soup I have ever had and I literally crave the stuff.  In any case, the reason I am telling you about this is because I did a trial subscription to Rachel Ray Magazine on my nook tablet.  I decided to continue getting the magazine and in the new year issue, this soup recipe grabbed my attention.  Its not the Pho soup I get at Pho Yum, but it was a pretty decent rendition of an Asian soup.  For my taste it wasn't spicy enough but for Grumpy it was perfect.  To make it perfect for me, all I did was add a little sirachi and hoisin sauce.  Grumpy loved it so much that he was not happy he forgot we had it when he went for lunch one day, and even after eating his can of yucky pork and beans, he filled up a bowl of the soup.  After he finished his words were "That was the worst soup ever.  You can never make it again."  Oh Grumpy.  Your such a smarty pants.  😉

Spicy Asian Chicken Noodle Soup
Jannuary-12-2013
adapted from Everyday with Rachel Ray Jan/Feb 2013 issue.
Ingredients
Instructions
In a medium saucepan, bring the chicken, chicken broth, and two cups of water to a simmer.  Lower the heat, cover and simmer until chicken is cooked through.  Approximately 30 mimutes.  Remove the chicken; let cool.  Shred the meat.Strain the broth and bring back to a simmer over medium-high heat.  Whisk the curry paste into the broth.  Add the noodles and bell pepper and cook until the noodles are just tender, about 3 minutes.  Stir in the chicken.
Ladle the soup into bowls and top with the scallions and cilantro leaves.  Serve with lime wedges.  Add sirachi and hoisin sauce to taste.
Details

Disclaimer - the thoughts and opinions on the Nook Tablet are purely my own. I did not receive any compensation in any way for writing this post. I just enjoy my Nook tremendously and wanted to share this with my readers.