Earlier this week I had Grumpy tell me things he would like to eat.  Making a menu for during the week can be very challenging because a lot of the time he doesn't get home until late.  He mentioned twice baked potatoes and my response was "on a week night?!"  He obviously doesn't realize how long it takes to make them.

I decided that on Saturday we would have the steak I bought at The Meat House over in Stuyvesant Plaza.  The weather was beautiful for an October day and Grumpy decided to grill the steak.  I got the potatoes going in the oven and about an hour later, as I was assembling them Grumpy was cooking the steak to perfection.  The steak by the way was absolutely melt in your mouth delicious.  We will definitely be going back there.  I have a coupon for a free sample of their steak tips that I intend to use soon! (another good reason to subscribe to the Times Union as that is how I obtained the coupon!) 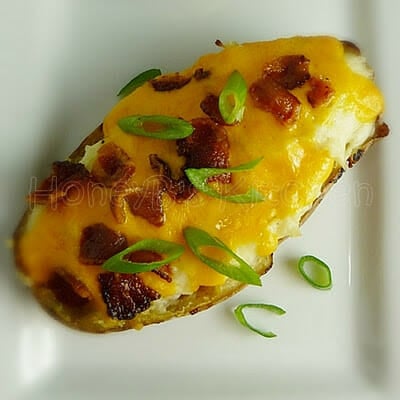 While I was getting the potato filling prepped, Grumpy came out into the kitchen and said "what ya doing buzzard".  I told him I was making twice baked potatoes.  His response?  "Well its about time you listened to me".  I don't know who he thinks he is, but he sure isn't my boss.  😉 So of course I went back at him and said, "I didn't make these for you.  I made these for me and you will be lucky if you get even one!"  Of course that entailed him cornering me in the kitchen, grabbing my wrists, and saying "I will too get one Buzzy!"  Of course I told him "Not unless you let go of me and let me finish making them!"  He seems to like to play this game where he thinks hes the boss.  On second thought, I should have bargained for a good old smooch in exchange.  ha ha ha.

While I was prepping the bacon for the potatoes, I received a text from my neighbor - see below: 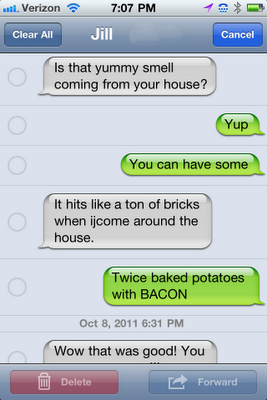 What you can't see is after she said it was good, she said "you can never move."  I may have gave her some yummy twice baked potato tonight, but she does a lot for us and I just love her!  Jill deserves anything she wants.  Do you hear that Brian?  😉  She has a heart of gold.

After I gave Jill her potato, I went back in the house and did the finishing touches on dinner.  I'd say Grumpy did eat like a King tonight.  I guess one night out of 7 isn't too bad!  Tomorrow's my turn though.  🙂  Maybe I'll feed us tofu. 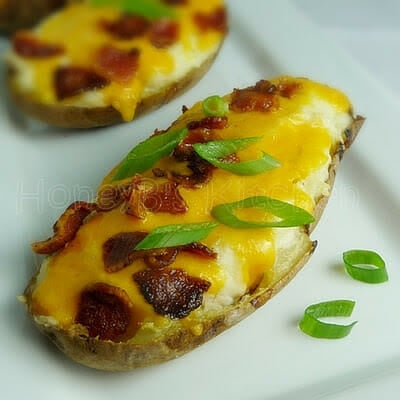 After scrubbing potatoes, pierce each one with a sharp knife 3 or 4 times.  This will allow the steam to escape while the potato bakes and it won't explode in your oven!  Bake at 375 for 40 minutes or until a sharp knife slides easily into the potato.  Remove from oven and let cool slightly.  Reduce oven heat to 350.

Cook bacon, drain, and crumble.  Slice potatoes in half and scoop out potato, leaving a slight bit of potato in the shell to help it hold its shape.  Mash potatoes with sour cream, salt, and pepper.  Mix in ½ crumbled bacon, green onion, and Italian cheese mix.

Fill potato skin shells with filling, top with Colby Cheese and bacon then bake for 20 minutes.  Remove from oven, arrange on serving platter and garnish with green onion tops.  Enjoy!