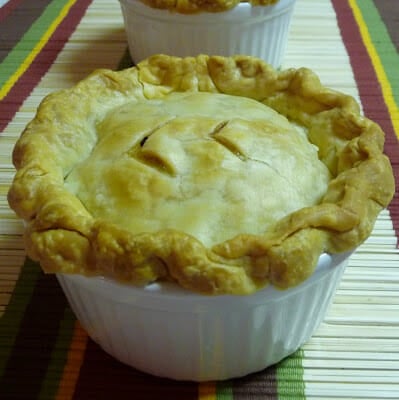 Nothing really scary today about the post. But I like the title! I want to wish all you tricksters and treaters out there a Happy Halloween! I will be shocked if we get trick or treaters at our home. We live in the boonies. BUT if they do come, I do have candy! If they don’t come, then we will eat it. Eventually.I remember when I was young my mom would drive us around the neighborhood to go trick or treating. Back then, the neighbors not only had store bought candy bars, but some of them would have homemade goodies. Those were the good old days. When my kids were little, the only homemade goodies I would let them eat would be the ones their Aunt April would give them. Or their Grandmothers. There was one lady, Mrs. Burnett, who made the best ever popcorn balls. Every year we looked forward to going to her home to trick or treat and get her popcorn balls! I do miss them. She is gone now, but her family is still around. I wonder if any of them has her recipe?

Another thing I remember about Halloween was the movie The Ghost and Mr. Chicken. Don Knotts. What a funny, funny man. That movie was awesome! He also was the one reason I loved to watch the Andy Griffith Show!

Speaking of chicken, I finally made mini chicken pot pies. I had been thinking about it the last few weeks but hadn’t gotten around to it. Then the Barefoot Bloggers beat me to it! All this did was push me to make mine even more because all the posts I was reading were making me hungry for chicken pot pie! I didn’t use a particular recipe. I just threw some things together that belong in chicken pot pie. I don’t have exact amounts, but I will “guesstimate” for you. 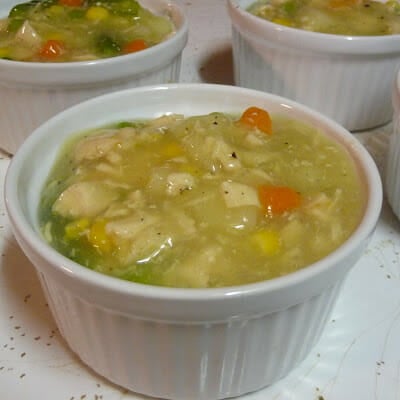 Using Pillsbury Pie Crust (yes, I cheated) roll out according to directions on package. Cut into 4 pieces. Cover ramekins and pinch pleat crust. 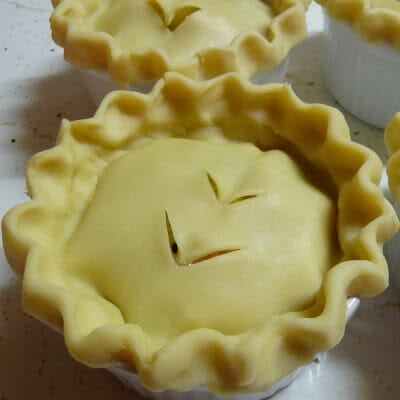 Cover crust edges with foil and place on large cookie sheet. Bake at 350 for 30 minutes. Remove foil from crust edges. Bake another 30 minutes or til crust is browned and filling is bubbly. 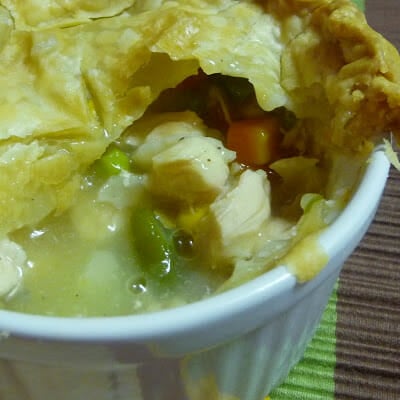