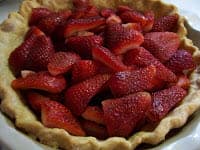 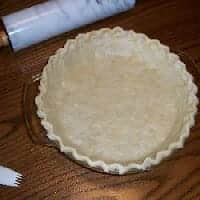 Yesterday Grumpy and I spent the day at home…..alone. I had a pretty blue day. It was my first full day at home since I lost Peabody and I had some computer time and came across all my photos of him. It just made me sad. I also was thinking of Nanny & Poppy who have both been gone from my life for quite some time now. We have special people in our lives we never forget!

It had been a while since Grumpy had pork chops, so I decided to grill him some chops with cob corn. We were supposed to have salt potatoes to go with dinner, but when I opened the bag, they were bad! So, instead, I took a few regular potatoes and fried them up with some butter. The best part of our meal was the dessert.

I haven’t made a homemade pie crust in ages, but since I didn’t have one of those handy Pillsbury pre-made crusts (yup, you just found out the one thing I don’t like to make myself!), I had to make my own. Mom has made oil pie crust in the past, so I decided to go that way this time. 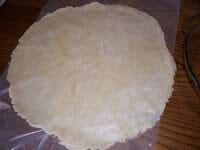 Spoon flour into measuring cup and level off. Mix salt and flour together. In measuring cup, measure oil and milk. Stir into flour mixture with a fork just until you are able to form a ball. Do not over mix!

Separate dough into two balls, wrap in plastic wrap and refrigerate at least 10 minutes (I did skip this part and if I hadn’t, maybe my pie crust wouldn’t have been tough!). I only used 1 crust so I formed the other into a pie pan and froze for baking later. 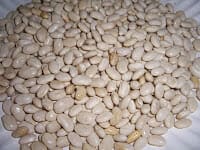 I baked my crust with my “natural pie weights” – uncooked navy beans! Hmmm, there is a good idea for one of my kids for Christmas – pie weights! However, the navy beans work just as well! I didn’t time how long it took to bake, but I did bake at 350 degrees until the crust was a browned.

Strawberries have been on sale the last week in our local grocery store, so I decided I would try making a Fresh Strawberry Pie. I didn’t have a recipe of my own, so I went searching on allrecipes.com again and found a few different recipes that I ended up “mixing up” and came up with my own version. 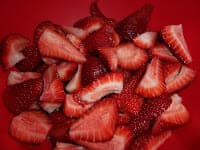 Mix sugar and cornstarch together. Pour in boiling water. Stir until dissolved. Bring to boil and cook until thickened. Remove from heat and stir in jell0. Set aside to cool.

After jello mixture has cooled, place sliced berries in pre-baked piecrust. Pour jello over top and place in refrigerator to cool. If your like me, try a couple of the berries after the glaze has been poured on…..just to make sure they aren’t musty! (I still think of Pastor Coe when I think of something being “musty!) 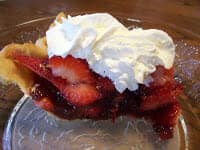 After you eat your dinner with your Grumpy and have sat on the couch surfing the web a bit and finding new items to make, you ask your Grumpy if he wants a piece of pie. If he say’s no, don’t listen to him because he doesn’t mean it! All he will do is wait for you to sit down with your piece, THEN he will say, I’ll take my pie now. If he does, make him get his own (yeah, even though I didn’t. You can be tougher than me and I know you can be!)